How to knit a doll

Knitted doll holds its shape well. You can choose color combinations and yarn. To associate the doll enough to possess the basic techniques of knitting. This doll will decorate your interior or become a favorite toy of the child. 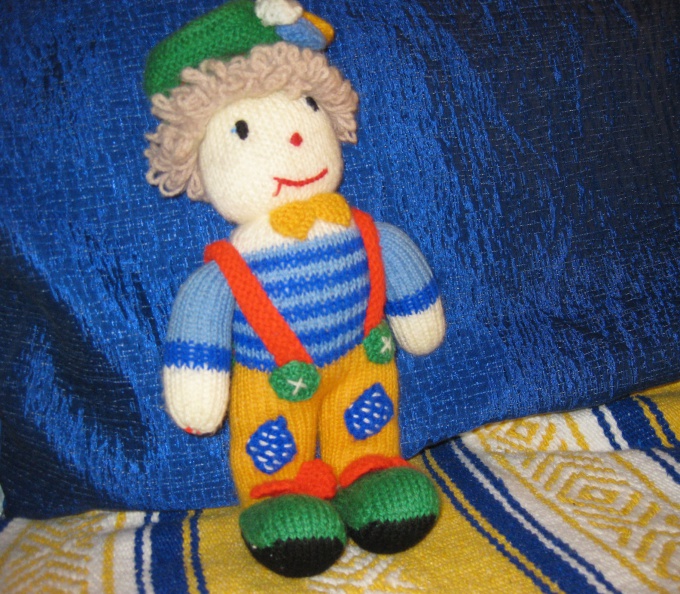 Related articles:
You will need
Instruction
1
Start knitting a doll 's trunk. Thread sand or flesh-colored dial on the spokes 24 of the loop. Provarite two rows of the facial surface. The third row start with promazyvanija the front loop. Then to the end of a number of alternate loops 3 front, 1 nakida. You will get 32 loops. Now you need to associate the facial surface 25 of the series. Nakide the previous row promazyvaya back. This will allow to avoid the formation of holes.
2
Now we need to create a shoulder bevels. For this provarite from the beginning of a series of 6 facial loops. Then do the decrease as follows: take off 1 loop, leaving it on the secondary spokes, proverite 1 facial. Knit this loop through the route taken. The following two provarite loops along the front loop. Run 12 front loops, repeat the decrease and again two loops provarite along the front. Finished row 6 of the front loops. The second and fourth rows knit purl. The third and the fifth rows of knit similar to the first, only the number in the first row of facial loops decrease with each next one (6 – 5 - 4), and the number of medium – two (12 – 10 - 8). In the sixth row all loops facial.
3
Now for the neck, run two rows front surface and proceed to the knitting head. Tie one row of alternating yo with two face loops. Next you need to associate the number 21 of the front surface. Then shape the top: alternate until the end of the series promazyvanie 3 front loops with 2 joined together facial loops. The second and fourth rows knit purl. In the third row 2 linked together loops 2 alternate with the facial and the fifth one. Finished sixth row, promazyvaya the remaining two loops together purl. After 6 loops pull the thread. Pull it tight and secure. Stitch the edges of the head and torso, leaving an opening for stuffing. After filling with batting, sew the opening.
4
Fabricate the two parts of the legs. Thread color of the shoes type the 14 loops. Until the end of the row repeat alternating nakida and 2 front loops. In the second row all the loops wrong. In the third row alternate 5 front loops with stitches. The fourth and the tenth rows of knit stitch facial. In the eleventh row you must perform the subtraction: once you propagate 7 front hinges, two times, follow obuvki as described in the second step, but promazyvaya removed the loop, and twice – stretching knit through the shot. In the twelfth row, all loops provarite wrong. The thirteenth number start and finish with promazyvanie two loops together, knit the other front. Continue knitting thread Nude, make 36 rows front surface. Closing in forty-ninth row, all loops, connect the seam edge, tamp synthetic padding and sew the legs to the torso.
5
For hands and dial for 5 loops thread Nude. First row knit, alternating front loop with nakida, second row - purl loops. In the third and fourth rows vymazyvaja 2 loops of 1. Then link the 31 a number of the facial surface. Close all the loops, sew, and stuff the handle. Sew to the body. Embroider eyes, nose and mouth. Strands for hair fold in half and sew to head. Tie the hair on the sides in two ponytails. Dress for doll you can also tie or sew fabric.
Is the advice useful?
See also
Подписывайтесь на наш канал