How to cook country-style potatoes

Potatoes inthe village of McDonald's few people leave indifferent – it is loved by many. Of course, the harm fastfude food is known to all, but it is very difficult to indulge in this yummy. This dish can be prepared at home, especially cooking varieties such potatoes a lot. 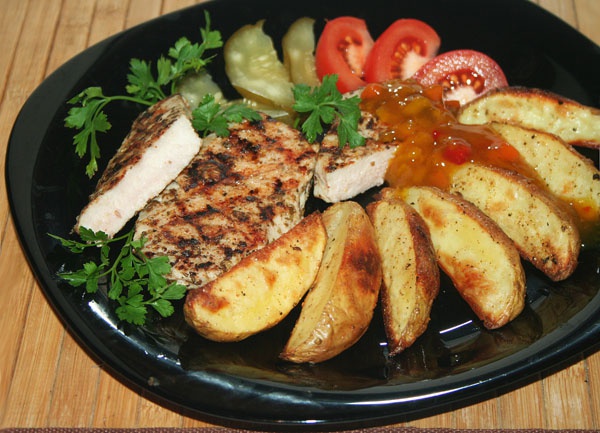 Related articles:
You will need
Instruction
1
Recipe 1. "Potatoes as usual".
Potato peel, wash and cut into large slices along the tuber.
2
In a frying pan or a deep skillet pour vegetable oil, the amount of which will be enough for deep frying. Bring it to a boil.
3
In the boiling oil put the sliced potatoes and fry until Golden brown, occasionally turning each piece with a spoon or fork. Until ready to bring not necessary. Remember, the oil temperature must be high enough to intensely boiled around potatoes.
4
Drain fried potatoes on a napkin to keep the oil a little it is absorbed and the slices were not very greasy.
5
Foil place on a baking sheet or form from it the likeness of the pan and place it on the grill. She put the rows of the slices of potatoes. Add salt, pepper and place in a preheated 180 degree oven for 15-20 minutes.
It turns out tasty and juicy potatoes, very similar to the analogue from McDonald's. The dish goes well with pickles, pickled mushrooms and various sauces. And also with fresh vegetables and herbs.
6
Recipe 2. "Potato wedges with pork ribs."
Potatoes clean, wash and cut into four pieces lengthwise potatoes.
7
In a heated pan pour the oil and increase the heat to maximum. Fry the potatoes until small Golden brown. Then place on separate plate.
8
Clean the pan, better than cast iron, set on medium heat. She put the chopped bacon and render it down. Make a fire the maximum and put in a pan the washed ribs. Fry them until the formation of a Golden-brown crust. After which put them in a baking pan. Add salt, pepper, add favorite spices.
9
Separately, fry sliced onions and put it on top of the meat. The next layer put the potatoes. Again, a little salt, add the Bay leaves, squeeze garlic, wine and 3 tbsp of water.
10
Put in a preheated 200 degree oven for 20-25 minutes.
11
Remove the dish from the oven. Place on a platter and sprinkle with fresh chopped herbs. To this dish perfect white sauce.
12
The taste of this wonderful dish on impossible to convey in words. The potato melts in your mouth and the meat turns out juicy and tender. It was prepared in a Russian stove, in the pots, even our grandmothers were called "country-style potatoes".
Is the advice useful?
Подписывайтесь на наш канал