How to cook squid rings in batter

Seafood has always been considered a health food. They are rich in proteins and minerals and dishes from them, as a rule, diet. Squid are not an exotic product, in contrast to mussels, scallops and urchins, and they are quite affordable. Buy squid at any store. And cook them fast and simple. 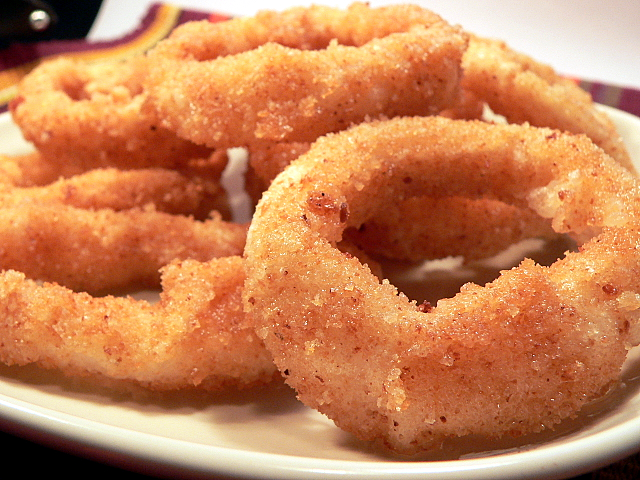 Related articles:
You will need
Instruction
1
Take three carcasses squid of medium size (about 500 g), three eggs, 125 g flour (a few tablespoons) and 125 ml of light beer. For the squid in the batter other than carcasses of medium size (about 20-25 cm), then the batter won't stick inside the rings and do ring fits in the pan.
2
Remove the squid previously the skin and remove the chitin rod. To quickly relieve the squid from the skin, dip it in hot water for five minutes. Long to cook, as carcasses can be hard. Then take the cleaned squid and dip in boiling and salted water(1 tbs. salt) for two minutes. After the second boiling, remove the carcass squid, they must decrease in size and become "elastic". Remove the squid from the boiling water and cut them into rings.
3
Prepare a batter.
The first method: carefully separate three eggs and remove the whites. Whisk them to a thick foam. Separately mix three egg yolks with the beer and flour until smooth. Pour it whipped whites and again mix well, add salt to taste. Second method: take five tablespoons of flour, three tablespoons of vegetable oil, half lemon, two eggs. Proteins whisk in a thick foam. Dissolve the flour in one Cup of beer or water. Add the butter and mix with the protein. Add lemon juice and mix.
4
To prepare rings of squid. In a saucepan heat oil and sauté in it the ring of the squid, previously dipped them in the batter. Fry until the batter "baked", then immediately remove the ring and place them on a napkin. This way the excess oil will be absorbed into the napkin.
Iriarte all the rings, then lay them on a baking sheet. Put them in the oven until Golden brown.
5
You can fry the rings in another way. Put the pan on fire and pour oil. Dip rings of squid in batter and place on griddle. Fry squid in batter until Golden brown. Then remove the rings and put them on a napkin. This way the excess oil will be absorbed into the napkin.
Is the advice useful?
See also
Подписывайтесь на наш канал