How to cook frozen squid

Available pantry protein – squid. Dishes of calamari, even frozen and easy to cook. In addition, they are easy to digest and helpful for people who suffer from diseases of the digestive tract, because squid contains extractives, which contribute to the secretion of digestive juices. 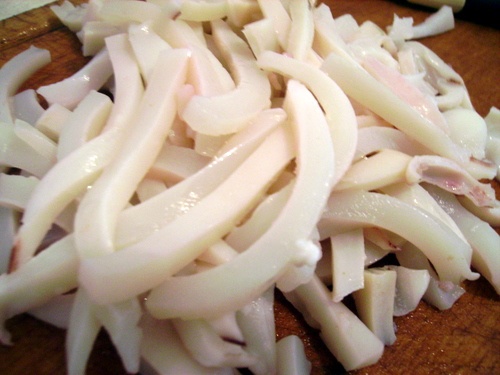 Related articles:
You will need
Instruction
1
When choosing squid please note that the carcasses frozen squid can be easily separated from each other. If carcasses stuck so they've been defrosted and are ready squid will taste bitter. Color squid must be white. Film that covers the carcass, can be as easy pink and purple.
2
First of all, the squid to defrost. If time is short, you can put the frozen calamari in cold water. Don't defrost in hot water! It is better to thaw the squid in the air, because it retains more useful properties.
3
Eating can be the head, tentacles and body of the squid. Before cooking the squid should be cleaned from film to release from the inside and remove the chitin plates. Press the carcass of the squid to a cutting Board, gently peel the skin with your fingernail. She should star in stocking. Remove the skin and wings of the squid. Thoroughly rinse the carcass under running water inside and outside.
4
There are several ways of cooking squid. Just remember, cook squid need no more than 3 minutes. If you cook longer, the squid meat will become tough. The first method of cooking. Boil water by adding salt. Dip in boiling water the carcass of a squid. Cover pot and remove from heat. After 10 minutes squid meat is ready. The second way. In boiling water omit one carcass of a squid. Count to fifteen, remove squid with a slotted spoon. Repeat this procedure with all the carcasses. A little secret. If you cook the squid for 30-40 minutes, the meat again becomes soft, but will lose half of its volume and weight.
5
Take a salad bowl. Tear lettuce in large pieces, sprinkle with lemon juice, stir.
6
The grapes for the salad you need to take pitted. Thoroughly wash it and cut each grape in half.
7
Boiled squid cut into strips. Adyghe cheese cut into strips or cubes. Instead of Adygei cheese, you can get feta cheese.
8
Add in a bowl the cheese, squid, grapes. Season with olive oil, stir gently, and serve. Bon appetit!
Note
Peeled from the film meat cook no more than 2-3 minutes, and, most importantly, with the rapid boiling. The longer the meat will lie in hot water, so it will be tougher. We must remember that squid meat is almost pure protein and therefore requires the same careful treatment.
Useful advice
Squid salad is prepared in three main ways - boil the whole carcass, cut into strips and boiled, added to a salad raw. The taste of squid is relatively neutral, making it easy to combine a squid with a variety of ingredients. Depending on the processing method, as well as the other ingredients of the salad, vary the sauces and salad dressings.
Is the advice useful?
See also
Присоединяйтесь к нам
New advices