How to teach a child to say "Mama"

Experts on the psychology of language and psycholinguists explain that adults play a very important role in the development of the language skills of their children. The child is not simply imitating adults, and rewarded for correctly pronounced words. The thing is that the kid thanks to the parents acquires the skills of speech long before it can utter the first word. 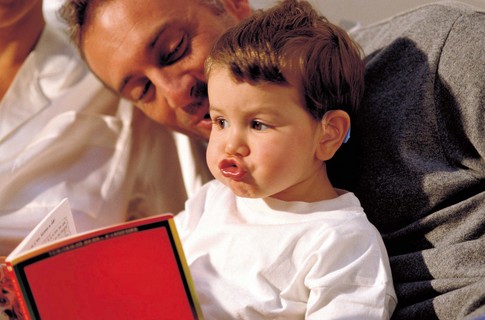 Related articles:
Instruction
1
Typically, the first word of the child is not "mother" (his first spoken by only about 40% of children) and "give" (this is the first word in 60% of children). These first words are preceded by months of joint work of the child and his parents. Constant communication is the Foundation through which children begin to speak. Please note that parents have talkative children begin to speak faster. Don't miss the opportunity as often as possible to talk with the child. For example, if the walk baby doesn't sleep, tell him everything that you see and think.
2
Playing with the baby games, clearly pronounce the word "mother" and say it on the emotional lift. For example, use the word "mother", asking the child "Where's mom?" and hiding behind the palms. Rejoice, praise and clap when the child gives the correct answer. Kids love praise. Moreover? it stimulates their further development.
3
According to psychological research, children older than four months prefer the so-called parent type of speech. Usually parents start to speak-especially when the baby learned to speak the first words. Then mom and dad, referring to the baby, talking in short sentences, stretch out the vowels, a tone of voice. That they are trying to help the child to learn the language further. But until the child said his first word, talking to him as an adult. And in vain. Kids are more comfortable with the type of the parent speech. Thanks to him and the first word "Mama" (or "Dai") will be able to speak faster.
4
To stimulate language development by using finger exercises and games to develop motor skills. Also positive dynamics have on the language development of toddlers of diverse methods on the speech development, for example, "Say from the cradle", etc. Classes, games will contribute to the development of the child's speech in General, and in particular closer to the time when the child first says the word "mother".
Is the advice useful?
Подписывайтесь на наш канал