How to make a hockey goal

Hockey gates have specific dimensions and configuration, and they should have to 1.22 cm in height above the ice surface and 1.87 inches wide internal dimensions. The depth of the gate should be of 1.12 cm Slats made of a special material having a circular cross section with outer diameter of 5 cm Side and top racks obyno painted in red, and the stands stretches a special mesh fabric that dampens the movement of the puck. Themselves gates are attached to the ice with the help of iron rod so that they do not move out from the place and at the same time it was moving to the goalkeeper and the players who hit them didn't get injured. 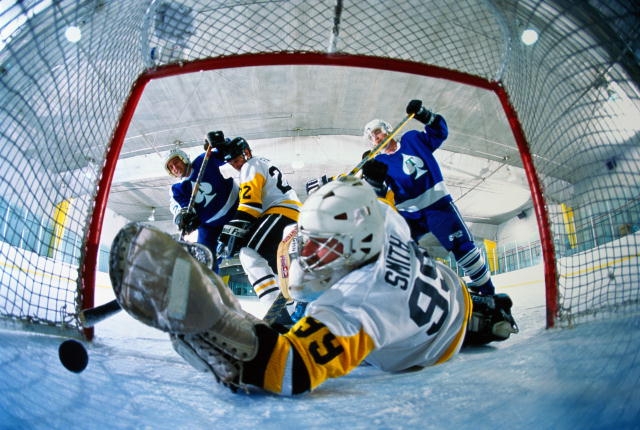 Related articles:
You will need
Instruction
1
Hockey gate to the yard site is easy to fabricate on their own. A hacksaw cut metal corner rack woodwork: 4 PCs 122 cm, cross bar 1 PC - 187 cm, 2 PCs 87 cm (lower and upper rear crossbar), 2 pieces 112 cm top, connecting the upper front rail upper rear, and 4 units at 122 cm at the crossbar that connects the side posts of the gate with the rear struts top and bottom. So your gate will have a trapezoidal shape when viewed from above.
2
With the help of welding machine weld the front and rear frames of the gate, the front will have the bottom rail and the rear will consist of the side posts, top and bottom rails between them. Weld the front frame to the back using 6 rails: 2 top and 2 bottom on each side, 2 on top at a right angle to the front crossbar.
3
Drill around the perimeter of the outer frame holes for fastening mesh. Clean the weld with sandpaper and paint gate paint on metal: the outer frame in red color, the back and the crossbar - white.
4
Pull the gate grid, using the drilled holes. Install gates on the field and before each on the surface of the ice field, apply a red line 5 cm wide, inside the line color square collar in blue color.
Note
The Motherland of hockey is considered Canada. Hockey - the game is old, the competition was held in Canada in 1763. The first official game was recorded on March 3 1875 in Montreal. Rules, of course, were different, puck wood, and the teams played to 9 people.
On March 3, 1875 in the hockey arena appeared first on the gate. Now that they are needed, like a hockey attribute, as the point of the game. After all, the goal of the enemy is the main goal of every hockey player.

The history of hockey gate has some interesting points. In 1900, was invented grid for the gate. It allows you to determine exactly goal is scored or not. In 1945, outside the gate put two lights, red and green. The red light meant the goal, and the green goal is not fixed. Today, information about missing in the gate washer is served and a sound signal.
Is the advice useful?
Присоединяйтесь к нам
New advices