How to draw a sociometry

Sociometry is one of the most used diagnostic procedures for the measurement of interpersonal relationships in the group. Sociometry, by definition, its Creator Moreno, is an empirical science that quantitatively and qualitatively evaluates the interpersonal relationships and feelings associated with the roles people play in social-emotional structure of the group. The essence of the sociometric method consists in the selection of group members other group members for joint activities in any given conditions or the particular situation. 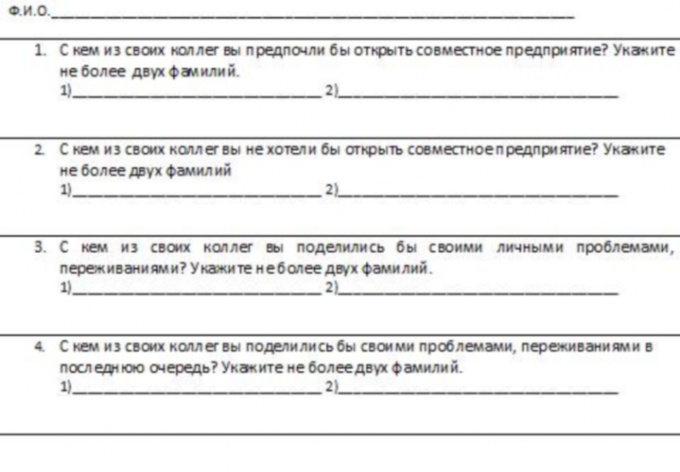 Related articles:
Instruction
1
The sociometric choice criterion, i.e. the question asked to all members of the study group to clarify the relationship between them.
The criterion should be an indicator, the indicator of these relationships. For example: "who of your classmates you would like to pass along practice?". The criterion should contain a proposal for the selection or rejection should be phrased so that the responses of the members of the group showed their emotional attitude.
2
Selection procedures sociometry.
Here two variants are possible. In the first meeting chooses so many persons as he thinks fit.

In the second case – chooses to meet as many faces as agreed in advance.

For a group of 20 people, for example, limit the number of choices to 4.
3
Preparation of sociometric questionnaires (cards) to collect information.
It should be a clear indication of how to fill out a card (if necessary), restrictions on the choice and sociometric questions. Sometimes the card briefly stating the purpose of the study.
4
Processing of the received data.
First calculate the number of positive and negative elections, as well as the number of mutual elections for each member of the group. Further, depending on the objectives of the study are evaluated a variety of solo and group indices, characterizing the system of relations in the group.
For example, it is possible to calculate the positive sociometric status of any specific group member: