How to cook mushroom soup

Tender, rich, aromatic – all these epithets is the best suited for mushroom soup-puree. The easiest soup with mushrooms. You can make it more refined by adding shrimp or cubes of smoked bacon. Mushrooms require special treatment. Here it is best to give preference to recipes from the masters of culinary art. How to cook souppuree? 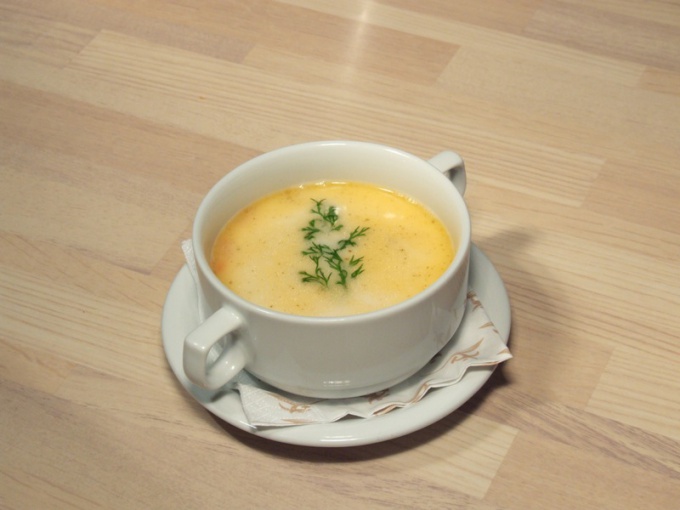 Related articles:
You will need
Instruction
1
Soup-puree of fresh champignones frying pan over medium heat, melt 2 tablespoons of butter. Add the sliced mushrooms and fry them until light Golden brown. To put the mushrooms in a bowl.
In the same pan add another 1 tablespoon oil and fry the onion until soft. Add the flour and sauté for 1 minute.Remove from heat the pan and put pan with chicken broth. Bring the broth to a boil and put it in sauteed mushrooms, onions and spices. Cook on medium heat for about 15 minutes.Turn off the heat and dip in the soup blender. Then you need to make mashed potatoes. Dilute the resulting soup-puree heavy cream. Do not heat! Serve with croutons and chopped fresh parsley.
2
Soup-puree from canned mushrooms with kraevedeniia 1 Cup of broth in pan and heat in the broth of the shrimp. Remove shrimp with a slotted spoon, place on a plate and cover with a lid. Broth pour into a saucepan.Heat a skillet over medium heat. Open the can of mushrooms, drain the liquid. Put the mushrooms on a dry pan and wait until the remnants of liquid evaporated. Add the butter, onion and chopped celery. Fry the mushrooms and vegetables until tender.Pour into a pan with the remaining broth and bring to a boil. Add the mushrooms with the vegetables and simmer. After 15 minutes, pour a little broth into a Cup, dissolve in it the potato starch. Turn off the heat and preroute the soup. Turn on medium heat and pour in the broth with starch. Cook until thick, stirring constantly. Turn off the heat and add the cream. Stir the souppuree. Put on the bottom of soup plates of shrimp, pour the souppuree and sprinkle with chopped parsley.
3
To make a soup-puree of brown mushrooms and dried porcini mushrooms from Gordon Ramsay too easy.Put the dried mushrooms into a small bowl and pour boiling water so that it completely covers the mushrooms. While the dried mushrooms soak (about 10 minutes) take other ingredients.In a thick-walled saucepan, heat the olive oil. Place chopped onion and garlic and fry until transparent.Add in a saucepan the butter and when it begins to foam, place the sliced mushrooms, dried and sliced porcini mushrooms. Stir and fry on high heat for 4-5 minutes, until mushrooms become brown.Add the wine or sherry, and an infusion from dried mushrooms. Bring to a boil, reduce heat and simmer for another 5 minutes.Preroute the soup, add the cream, salt and pepper. Put a spoonful of truffle oil.Before serving the soup a little heat, add some fresh cream to make a plate of the famous "curl" and sprinkle with chopped green onions.
Useful advice
Brown mushrooms to taste closer to the forest mushrooms, and have a pronounced nutty flavor.
Is the advice useful?
Присоединяйтесь к нам
New advices