How to make a beak out of paper

Of ordinary paper can be folded without scissors and glue a variety of shapes – for example, a section of origami is devoted to folding a variety of birds. When assembling the bird pieces you need, as in other cases, to achieve realism and recognizability, and then, a paper bird must have a neat and beautiful beak. How to make a beak paper birds in several ways, we will discuss in this article. 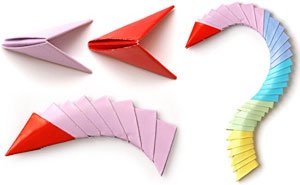 Related articles:
Instruction
1
Take a sheet of papercut in the shape of an arrow (rough diamond), and fold it in half lengthwise. Fold the left part to the right, aligning the left corner to the right, and then vignete pocket from the left side so that the diamond in the left part of the figure was looking down. This way you can make the figure of a bird looking directly at you.
2
In order to make the head pecking birds, make of paper the arrow and fold the long part of the fold "zigzag". Holding the folds, fold shape in half lengthwise, placing folds from the inside. Then in the left corner sticking out of the zigzag fold, pull a little sideways to the bird tilted his head."
3
Based on the figures of the "boom" you can make another type of beakand place the shape in half vertically, and the top corner vignette at an angle of 90 degrees to the side. At the tip of the beakand make one zig-zag fold.
4
Sleeping bird you get, if folded in half, the arrow you fold like an accordion, guiding the folds of triangles from the bottom up. Bend lines are better to plan in advance with a pencil.
5
The beak of a flying crane happens also out of shape "arrow". Make a pleated, zigzag closer to the long edge guiding a crease from top to bottom. Then fold the arrow in half straight edge up.
6
In order to receive the beak of a penguin, fold a square sheet of paper diagonally and squeeze its tip, forming a triple pleat. You have a narrow beak of the penguin.
Is the advice useful?
Присоединяйтесь к нам
New advices