How to find the force of sliding friction

Problems in school physics to determine the force of sliding friction is mostly considered to be rectilinear uniform or uniformly accelerated rectilinear motion of a body. View how to find the force of friction in different cases, depending on the conditions of the problem. In order to assess the influence of forces and write the equation of motion, always draw a drawing. 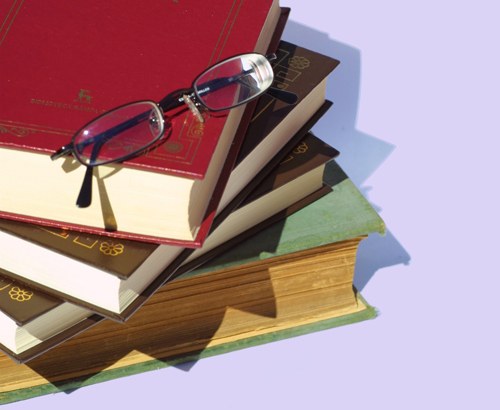 Related articles:
Instruction
1
Case 1. The formula for force of friction: Fтр = MP, where m is the coefficient of sliding friction, N is the reaction force bearing, N. Body sliding on a horizontal plane, N = G = mg, where G is the weight of the body, N; m – body mass, kg; g – free fall acceleration, m/S2. Values of the dimensionless ratio m for a given pair of materials is given in reference literature. Knowing the body weight and a few materials. moving relative to each other, find the force of friction.
2
Case 2. Consider a body sliding on a horizontal surface and moving uniformly accelerated. It is subject to four forces: the force that causes a body in motion, the force of gravity, the reaction force bearing, the sliding friction force. Since the surface is horizontal, the reaction force bearing and the force of gravity is directed along the same straight line and balance each other. The displacement equation: Fdv - Fтр = ma; where Fdv – power module, causing the body to move, N; Fтр module of the friction force, N; m – body mass, kg; a is the acceleration, m/S2. Knowing the mass of the acceleration and forces acting on it, find the force of friction. If these values are not specified directly, see if the condition data from which it is possible to find these values. 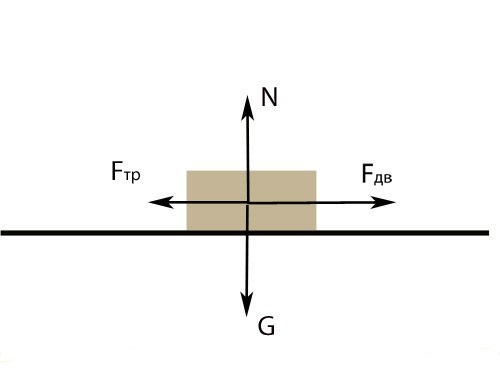 3
Example problem 1: a block of mass 5 kg, lying on the surface, the impact force of 10 N. As a result, the bar is moving uniformly accelerated and passes 10 meters in 10 seconds. Find the force of sliding friction.

As in the first example, the slide bars affect the strength of the movement and the friction force. As a result, the impact of the body stops, i.e. comes to equilibrium. The equation of motion of the bar: Fтр = Fdv. Or: N*m = ma. The bar glides uniformly accelerated. Calculate its acceleration like a objective 1: a = 2S/t^2. Substitute the values: a = 2*10/5^2 = 0.8 m/S2. Now find the friction force: Fтр = ma = 0,8*1 = 0.8 N.
6
Case 4. The body spontaneously moving up an inclined plane has three forces: the force of gravity (G) force of support reaction (N) and friction force (Fтр). The force of gravity can be written in the following form: G = mg, N, where m is body mass, kg; g – free fall acceleration, m/S2. Since these forces are not directed along the same line, write the equation of motion in vector form. 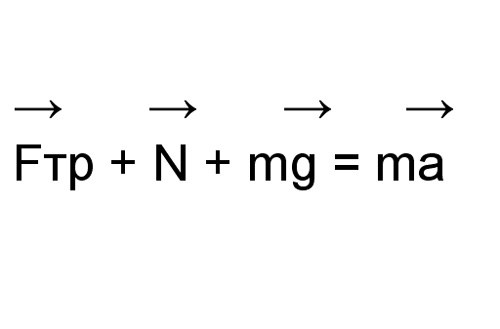 7
Folded according to the rule of the parallelogram of forces N and mg, you will get a resulting force F’. From the figure we can conclude: N = mg*cosα; F’ = mg*sinα. Where α is the angle of the plane. The friction force can be recorded by the formula: Fтр = m*N = m*mg*cosα. The equation of motion takes the form: F’-Fтр = ma. Or: Fтр = mg*sinα-ma. 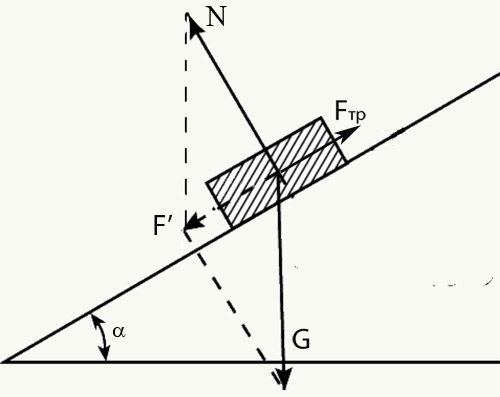 8
Case 5. If applied to the body an additional force F, directed along an inclined plane, the friction force is expressed by: Fтр = mg*sinα+F-ma, if the direction of motion and the force F are the same. Or: Fтр = mg*sinα-F-ma, if the force F opposes the motion.
9
Example problem 3: a block of mass 1 kg slipped from the top of an inclined plane in 5 seconds, having risen 10 meters. Determine the force of friction if the angle of inclination of plane is 45°. Consider also the case where the bar is exposed to an additional force of 2 N is applied along the angle of inclination in the direction of movement.

If applied to the body an additional force (F), which prevents a uniformly accelerated movement, the expression of motion has the form: mg*sinα–Fтр-F = 0. Hence, find the force of friction: Fтр = mg*sinα.
Is the advice useful?
See also
Подписывайтесь на наш канал