How to determine the GDP deflator

Deflator of GDP is an aggregated index of the General price level, which is calculated as the ratio of nominal and real GDP (Gross domestic product). He is one of the main price indices used in macroeconomic calculations to measure changes in the price level. 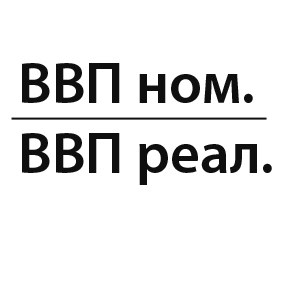 Related articles:
You will need
Instruction
1
Define nominal GDP in the studied year.GDP (gross domestic product - GDP) is the total value of all goods and services produced in one specific country for a certain period of time. Mainly for calculating GDP annual period. Nominal gross domestic product referred to as GDP measured in current period prices. In order to know its value, you can use the website of the state statistical service (http://www.gks.ru/)
2
Define real GDP.Real GDP is gross domestic product, which eliminated the changes in the price level. It is presented in constant prices, i.e. in prices of that base year, against which we need to calculate the deflator. In terms of tasks macroenomic real GDP, as a rule, is given. In practice, on the website of Rosstat presented the GDP deflator, expressed in percent. About it it is possible to calculate real GDP. Thus, this indicator helps us to see the real changes in production volumes of goods and services in the studied country and helps to identify trends.
3
Substitute the known values into the formula: Deflator GDP = nominal GDP/Real Supprimer calculating the GDP deflator: if in 2010 the nominal GDP amounted to 120 000 CONV. den. units, and real GDP in the base year (2008) 100 000 CONV. den. units, the deflator is 120 000/100 000 = 1,2. This result means that the price level for this period increased by 1.2 times.
4
Deflator GDP refers to the Paasche index. It indexes to the changing set of goods or with variable weights. It can also be calculated by the given formula. In fact, this formula is similar to the previous one, but in terms of tasks sometimes give data for GDP and the volume and price of produced/consumed goods. Substituting the known to us the numbers into the formula, we get the Paasche index or the GDP deflator. 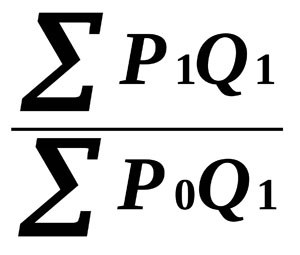 Note
The GDP deflator reflects changes in price and consumption structure, because it uses the volume of goods and services this year.
However, the disadvantages of its calculation include the complexity of obtaining quantitative characteristics of the studied products. It may understate inflation because of the changed structure of demand for the risen in price goods.
Is the advice useful?
See also
Подписывайтесь на наш канал