How to make ginger for sushi

The original spicy flavor of the pickled ginger is an integral part of many Japanese dishes, the perfect complement to the rolls and sushi. Pickled ginger can be made at home. If all the rules you can not tell it from what used to try at Japanese restaurants. 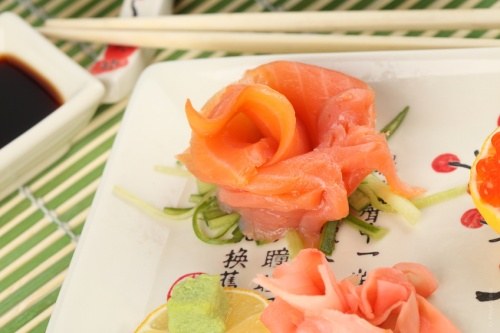 Related articles:
You will need
Instruction
1
Take a fresh ginger root. Clean it, sprinkle with salt (better to take natural sea) and leave for a few hours, even at night. When ginger infusions, rinse off the salt, sushithose cloth. Put the root in boiling salted water and cook for 2-3 minutes, if the root came across harsh - it is possible to cook for a minute or two longer. Remove the ginger from the boiling water, aboutsushithose and let it cool, then cut into thin slices. Better to do it with a very sharp knife. You can also marinate the whole root and cut it as serving, but then soak it in the marinade longer.
2
Prepare the marinade: mix the rice wine mirin, sake, sugar. Boil this mixture, stirring to dissolve sugar, then pour in the rice vinegar, again bring the marinade to a boil. Pour over the ginger, putting it in a glass or ceramic jar, close it and put in the cold for three or four days. Beautiful pale pink ginger will acquire over time, so if filled with marinade root did not immediately similar to those pink petals that you see in stores and sushibars, don't worry that you failed – just wait.
3
Exotic ingredients are sold in large supermarkets or in specialty departments. If you failed to get real rice vinegar, wine and sake, they can be replaced by more familiar products. Instead of rice vinegar take Apple cider, wine, you can add plum or rose grape, and sake to replace the usual forty degrees vodka, but to take it will have twice smaller than stated in the recipe.
4
If you do not wish to add to the dish of alcohol, try replacing the wine with plum juice, and vodka do not use at all. Marinate ginger in this case will have a bit longer. Sometimes the root is simply marinated in a mixture of vinegar, sugar and water, but it becomes pink. If you want to be the usual shade, while cooking add a few slices of fresh beetroot pulp.
Note
Recipe pickled ginger is not complicated. Differences can occur only in the cooking marinade. How to pickle ginger for sushi recipe for homemade blanks. Pickled ginger should brew for three to four days in the refrigerator. But with a great desire you can eat it after 5-6 hours. Shelf life pickled ginger 3-4 months. Pickled ginger can be served with vegetables, and fish, and sushi.
Useful advice
Pickled ginger served with sushi is served everywhere today, but how to pickle ginger for sushi at home – not everyone knows. Today we offer a few recipes pickled ginger. Over time, the ginger is a pale pink color. Pickled ginger after preparation should be stored in the refrigerator. Its shelf life is two months. To serve pickled ginger can not only sushi, but also for fish.
Is the advice useful?
Присоединяйтесь к нам
New advices