How to cook Turkey gizzards

Stomachs of birds do not belong to the valuable food products, nutritional content and nutrients in them is quite low. The muscular bag of the stomach harsh, so it must either marinate or boil and simmer. On the other hand, a "rubber" consistency ready-stomachs - that's what makes the dish attractive. 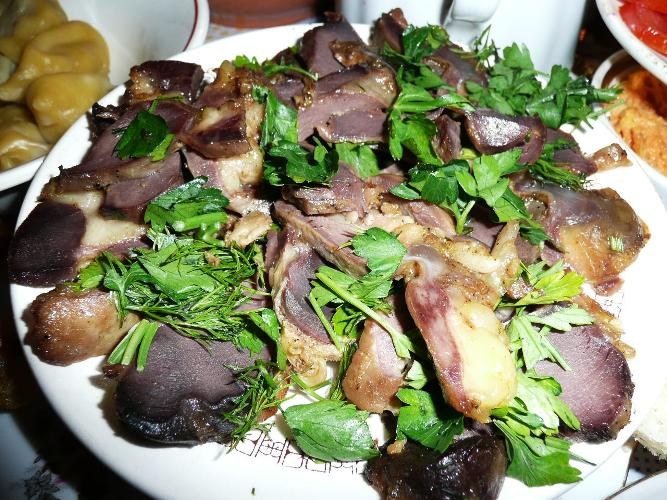 Related articles:
You will need
Instruction
1
Rinse the gizzards under cold water, remove the film of yellowish color, white can be left. Boil them in salted water until tender (about one hour), broth save.
2
Finely slice the onions, heat 20 ml oil in a pan and saute the onion. Drain the broth from the gizzards in a separate bowl, cut them into thin slices, add to the frying pan to the onions, stir. Add three quarters cups of broth to the pan and simmer, covered for about half an hour.
3
Finely slice the garlic and add to the pan, add soy sauce, stir and simmer for about five minutes. Chop the parsley, green onions and dill, and sprinkle the finished dish.
4
Pickled bellies in guchokipanya and cut the stomachs of about four pieces each. Put in a bowl and add prepared teriyaki sauce, red meat sauce (not spicy), soy sauce, ground chili pepper. Leave to marinate for one and a half hours. Cover the baking pan with baking paper or brush with oil, place the marinated gizzards, top cover with foil, bake for an hour.
5
Stomachs baked with packagenamespace stomachs, put in a saucepan and pour 1.5 liters of boiling water, remove the foam, add pepper and simmer until soft (about fifty minutes). Drain the broth and slice the stomachs of thin plates.
6
Wash the eggplants, remove the stalk, cut lengthwise, brush with oil on all sides. Preheat the oven to 180oC, put the cut up eggplant on a baking sheet, bake for about half an hour, until soft.
7
Finely chop the onion and garlic, heat pan with two tablespoons of olive oil, saute the onions and garlic over medium heat. Put in a pan the sliced stomachs, add Khmeli-suneli and salt, cook for about four minutes.
8
Remove the pan with eggplant from the oven, carefully remove the core, leave it on the wall about two centimeters of flesh. Chop the core of the eggplant and add to the stomach is in the pan, add the olive oil. Fill with the mixture, half of eggplant, top with grated cheese, place in oven and bake for about ten minutes.
Is the advice useful?
See also
Присоединяйтесь к нам
New advices