The cuisine of the Balkan Peninsula – a love of pork, seasonings of various peppers and the obligatory presence of the soup. Due to the very cold winters the dish is incredibly rich. In the Balkans like lamb, fish, poultry, cheese cheese. The most popular way of cooking meat is cooking on charcoal. Of course, there are very fond of fish, this catfish, mackerel, tuna, trout, rice dishes of cuttlefish, and crayfish. The cuisine is rich pastries and various pies. 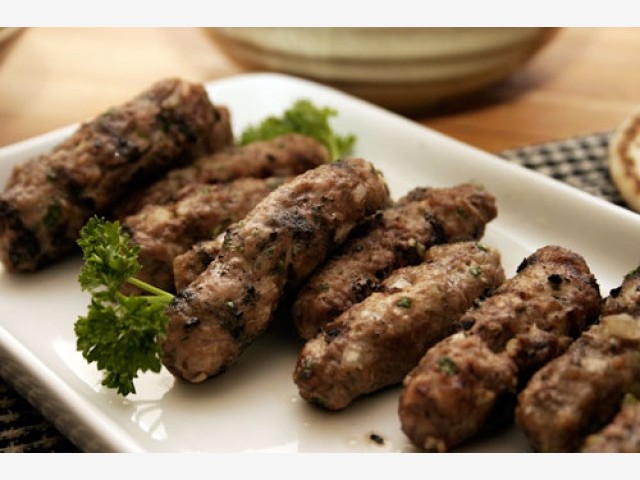 Cooking with the spices added in Balkan cuisine is not particularly popular, they are added solely to balance out the taste. Alcoholic drinks are mainly prepared from fruits, the most popular drink is rakia made from plums.

It's an iconic dish in Croatia and Serbia. It is the small sausages of minced beef, roasted on the grill. Served with lots of onions and baked potatoes.

Onion peel and chop quite finely. Chop the garlic on a grater.

In a bowl, mix all the ingredients. Knead about 15 minutes, until they begin to stick to the hands.

A Cup of minced meat roll up film and to remove in the cold for two and a half hours, preferably overnight.

Then make a sausage about 10 cm long and 3 cm thick.

Preheat the frying pan to the grill and cook the sausages until they are ready. By submittingAMB with onions and baked potatoes.

It is the national soup in the Balkans. He prepares a thick and basically like stew.

Cut into squares onion, carrot, celery, parsley root. In a saucepan, where it will boil soup, heat the sunflower oil and onion, fry and add the remaining chopped vegetables.

Meat cut into medium pieces and put it to the vegetables, simmer until all the juice evaporate and the meat will become white, add the parsley, pour some water and wait for boiling. Once all boils, it should boil for about half an hour. Again add some water to the total volume of turned around three liters.

In a small pan, melt the butter, add the flour and fry. Add 100 grams of broth from the pan and stir, to avoid lumps. Flour pjure to add to the soup and stir.