How to make cats

Cats do not belong to a pack animal, and they company is not required. However, because of the big love to these lovely animals, or perhaps out of sympathy for the abandoned street kittens, the owners acquire the second pet, and sometimes several. In most cases, the two cats in the house get along with each other after a short period of lapping, but sometimes the process of habituation is delayed for a long time. How to make cats to each other, if they don't want to put up with the neighborhood similar? 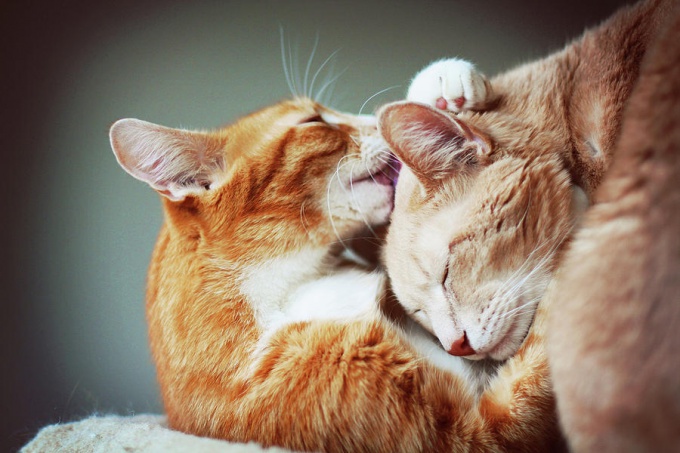 For a start it is necessary to introduce animals to each other. A new pet it is advisable to put in the house in a special cage-carrying lattice door with one hand or in a box with holes for breathing. Let the "hostess" comes around and around, sniff a new roommate, get used to it. Then after some time open the door carrying that new guy could come out and look around. Open doors and Windows that close. Also try to cover hard-to-reach places where the animal can hide in case of conflict.

Bowls for food and water and a toilet should be available to each cat their own. At least for the first time, you need to place them as far as possible to present at least a relative separation of the territory. So you can avoid a lot of conflicts.

If there was a fight

Most often familiarity without incidents – "the mistress" sniffs the new neighbor walks around with a sense of superiority, while new guy tries to walk slowly and not to attract too much attention. However, fights also happen. If animals are run one after another through the rooms, disturb them not worth it, but if they are head over heels rolling on the floor, clutching at each other, then they should be separate.

It is best to pour the fighting cats with water or throw them dark thick cloth. From unexpected darkness of the animal will stop, after which they will move (just move, but do not peel) MOP or broom in different directions. Then it is necessary to isolate the fighters in different rooms for about two days, then repeat interrupted acquaintance. If it happens again fight, repeat the process as many times as required.

In this case, conflicts are rare. The cat will bring up the kitten, taking on the role of mother. It can be tough, but aggression does not show.

Cats, usually kittens are wary. However, in this case, aggression is rare too, especially if your male cat neutered. Because neutered animals are usually more friendly and affectionate. The first time an adult pet can ignore the baby, but later they become friends.

Usually quickly get used to each other and gently attached. However, bowls for food it is better to put separately. The fact that the cat was first, maybe a paw to crack if a cat suddenly getting in his bowl, and secondly, if I'm hungry, maybe someone's lunch a set.

If you hooked to his pet another cat, pack of all, they are well with each other will get along. Most often, "mistress" itself takes the first role. However, there may be conflicts in heat or nursing kittens. How to befriend two cats? If they both or at least one of them neutered, then any difficulties you will have. Just keep an eye on the animals and their reanimate as described above, if there is a fight.

How to make friends with cats? It is, perhaps, the most risky option, make another. Be prepared periodically to break up the fighting for the territorial superiority of males, until they finally realize that you don't like their conflicts. However, a serious showdown, generally ceases of itself, when the more powerful cat, showing its superiority, takes on the leading role. However, bowls for food and water and toilet each pet must be in different places.

Well, if you decide to take the two kittens, then in General there will be no problems. The question how to make kittens, and do not need to respond. They simply won't fight. From time to time kids will pretend to fight, but it's just the game, but at the same time and exercise for both Pets.