How to interest a child geography — this question is asked by many parents. And can help interactive globe, it will be interesting for both younger students and adults. Manufacturers offer several models to choose the best interactive globe must be based on the requirements. 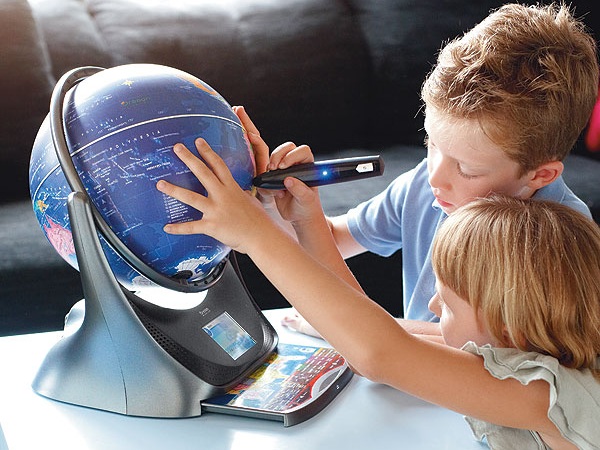 What is the interactive globe

Interactive globe is a device that is similar to the classic globe. However, at the base is a real computer with pre-programmed modes of operation, a surface of a sphere configured so that it is possible to find out information about cities and countries, putting on them with a pen.

Today the most popular two models of interactive learning globes. This Smart Globe 3 of Oregon Scientific and Intelliglobe from Replogle Globes. They both Russified, i.e. to "talk" in Russian, and that and the other is the training mode and programmed the game. However, there are a few differences that can influence the choice of model.

It is a small globe, its diameter of 26 cm (in contrast to Oregon Scientific with its 30 cm). The ball looks like two monolithic halves, United in the striking Hoop at the equator, the surface is traced very accurately. Special handle allows to obtain information by touching a point of interest on the map.

Detail map takes into account the peculiarities of the region, i.e., especially a detailed description of Russia and adjacent territories. There are States such as South Ossetia, recognized by Russia and is not recognized by many other countries. In addition, downstairs there is a separate pull-out map of the Russian Federation, with the indication of subjects and cities, and you can learn about these various details.

Interactive globe Smart Globe offers several options of games with different levels of difficulty and hints. In addition, it is possible to develop their own game scenarios.

The surface of the ball is significantly different from the Smart Globe, it is made of paper with a noticeable, though not too bold effect. This gives children the opportunity to represent the height of mountains and depth of seas, however, the presence of several paper fragments has resulted in the Parallels and boundaries of the States do not converge everywhere.

Detail map globe interactive Oregon Scientific noticeably Americanized. Specify only the major cities of Russia, and the unrecognized countries do not on the map. Information about Russia, which provides interactive pen, is not always adequate (putting the southern Urals, it is possible to obtain data on the Arctic ocean) — she's obviously just translated from other languages and not adapted to the country.

In this model there, but they are more for older children, without selection and tips. To win in some of them, should be well versed in geography.

What interactive globe to choose

So, when choosing interactive learning globe, you need to consider the requirements for it.