What kind of sauce you can simmer stuffed peppers

Stuffed peppers — a dish, as they say, not for everybody. Some people just don't like the vegetable that is the basis of the recipe. If the person is a fan of this dish, it not only cooks the peppers themselves, but also thinking about how to present them better. To cook stuffed peppers in a special way, you can simply submit it into any sauce. 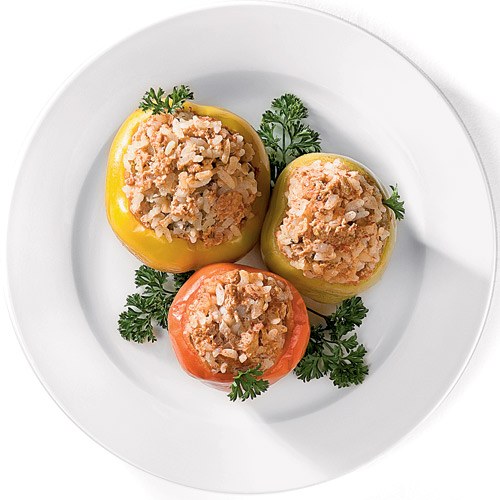 The secrets of delicious stuffed peppers

Some people just love stuffed peppers, so it is prepared almost every day. But in order to diversify the menu, use a variety of sauces.

Even if peppers stuffed with the same stuffing, different ways of fighting them taste different. As a stuffing it is possible to use not only meat, but also vegetables, diluting the stuffing cereals.

There are several secrets in cooking the stuffed peppers:

1. If you use uncooked rice for the stuffing, it is better to fill the vegetable is not too tight. But the tastiest part of the pepper is obtained if the cereal boil until soft.
2. The meat should be seasoned lightly braised in butter carrots and onions.
3. After boiling, the peppers should cover them with a lid and continue to cook, but on slow fire.

For a pleasant smell in the pot, you can put the Bay leaf, then put it on the fire. After the peppers to boil, you should cook them over a slow fire until tender.

The second method of quenching involves stuffed peppers cooking in the sour cream. The dish turns out more tender.

First you need to dilute the cream with water to become less dense. It is better if the amount of these ingredients when mixed will be the same. The mixture should occasionally be seasoned with ground pepper and salt. The sauce should pour into the pan with the peppers and boil them until tender.

There is another way of fighting. To do this, use tomato-sour cream sauce. To prepare it, you need to take two tablespoons of tomato paste and add it to 350 grams of water. Next is to season the sour cream with the spices and dissolve the resulting mass in water and tomato solution. The sauce should be added to the peppers and cook until tender.

For braising, the stuffed peppers, you can use tomato juice. For this purpose it is only necessary to add salt (lovers — pepper) and add to main dish.

Tomato filling can also play the role of a sauce. For this you will need a blender in which to place the chopped greens, slices of tomatoes and garlic. All this is necessary to grind and pour into the pan with the peppers. To tomato filling was not too dense it can be diluted in a little water.
Is the advice useful?
Присоединяйтесь к нам
New advices