How is stuffed peppers

Stuffed peppers are a delicious and nutritious dish. Often the pepper is filled with stuffing of different kinds of meat with vegetables. Eat pepper can be different: to separate into pieces with a knife, cut off slices and so on. 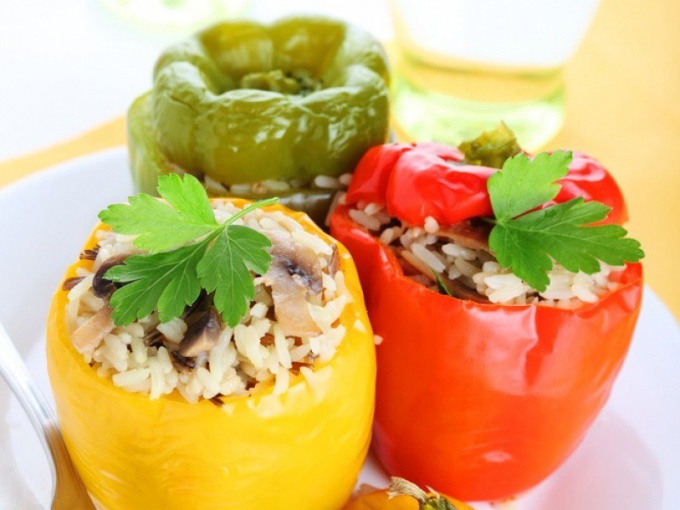 Related articles:
You will need
Instruction
1
Stuffed peppers is customary to eat the whole thing, despite the fact that some like to eat only the meat. Another thing, if the pepper were poorly cooked and bitter. To eat stuffed peppers, you should cut it with a knife into pieces. First, cut the pepper in half and then each part into several pieces. When the skin of the pepper is well cooked, make it very easy. While eating, hold the knife in right hand and fork in the left.
2
While at home, stuffed peppers can be eaten as anything. If you are afraid that the meat will disintegrate from contact with the knife, do not cut the peppers. Take it with plates in hand and eat it, neatly biting off small pieces. Have pepper with your hands is possible only in case if it is not drizzled some sauce.
3
Typically, the pepper is served with a sauce or gravy. Preparing such dishes of sour cream, tomatoes, vegetable oil, olive oil, mayonnaise, eggs, onions and greens. So, to prepare tomato-sour cream sauce to take pepper 200 ml sour cream, 3 tomato, 1 Cup water, 0.5 teaspoon salt, 0.5 teaspoon black pepper. Wash the tomatoes, peel and grate. Mix sour cream, grated tomatoes, water, salt and pepper in a skillet. Put the sauce on the stove and bring to a boil. Pour pepper sauce, during cooking or during serving. If the sauce contains a lot of spices, it is recommended to pour it in a dish for a few minutes before the end of cooking. Then stuffed pepper have time to soak up the sauce flavor.
4
However, you can make meat and gravy to stuffed peppers. Very good variant - meat Bolognese sauce. For its preparation you will need: 500 grams of minced beef, 1 carrot, 1 celery, 2 onions, 100 ml of olive oil, 3 tomatoes, 4 cloves of garlic, 1 tsp salt, 1 tsp black pepper. Chop the vegetables: carrots, onions, celery and garlic. Sauté them in butter until Golden brown. Add to the pan of mince, pulp of tomatoes, spices and finely chopped herbs. All mix thoroughly and simmer on medium heat until tender.
5
When serving stuffed pepper on the table liberally pour the Bolognese sauce. It is desirable to pour the sauce in to the meat soaked them. If stuffed peppers with sauce is falling apart while eating, do not do from this tragedy. Just eat the stuffing with a fork, and the peppers cut side of the plug. Spoon usually, stuffed peppers are not eaten, as it is not convenient.
Note
Stuffed peppers served on a flat large plate.
Useful advice
Stuffed peppers is part of the national Moldovan and Romanian cuisine.
Is the advice useful?
Подписывайтесь на наш канал