Who were the parents of Vladimir Putin

The childhood and youth of Vladimir Putin held in St. Petersburg. The future President of Russia was born in the family of Vladimir Spiridonovich Putin and Maria Ivanovna Putina (Shelomova). Parents of the future President were respected, honest and good people. Family friends, neighbors and acquaintances spoke respectfully about integrity, honesty and goodwill of Vladimir Spiridonovich. And the house Putins always greeted the guests with delicious pancakes, pies and cakes – the culinary pride of Maria Ivanovna. 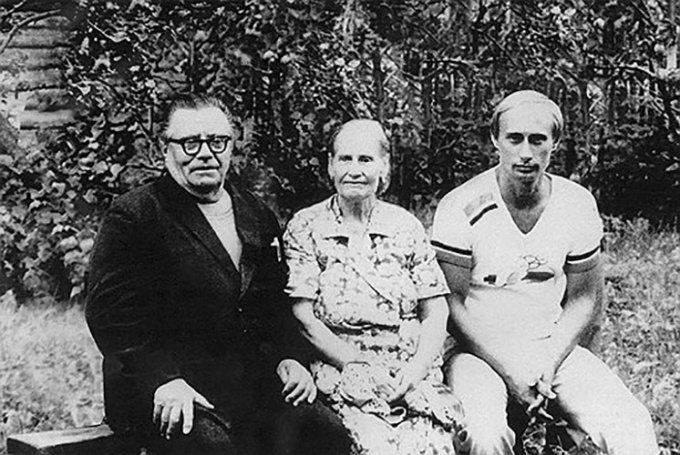 It was Maria Ivanovna childhood taught his son that we should live honestly, honestly, to be fair. Before the start of the great Patriotic war Maria Shelomova moved to Leningrad. She had a hard task – she's a young girl survived the famine and the siege of Leningrad. Like many Leningradka carried water from the Neva, stoked the stove in the room and dreamed of becoming a nurse. After the war she worked as a nurse. Her mother in 1941, were killed by the Nazis, and in the heart of the young Maria Shelomova always remained the hatred of the Nazi occupiers, keen sense of justice and love of country.

Father of Vladimir Putin was born in the Tver region in the village of Pominovo. In the pre-war youth, he was a Komsomol activist in his native village and dreamed of the railroad, locomotives and travel. Dreamed of secret trails, and kilometers of new rail laid. Vladimir Spiridovich participated in the great Patriotic War, returned from the front alive, and on both legs. In 1945 he settled in the guards carriage works closer to their favorite locomotives. Later he became a factory worker and later a master.

The parents of Vladimir Putin were married after world War II and did not part until death. According to friends of the family, the couple respected and loved each other, created their family values and traditions. On every family holiday Maria Ivanovna was cooking a very large dish pies with cottage cheese, cabbage, rice and eggs. Their doors were always open to guests and numerous relatives. Parents of the future President didn't swear, lived in perfect harmony since his childhood and raised their son in rigor, but in love, in respect for elders, instilled in him the cultural values. They gave Vladimir a good education and encouraged all his undertakings.

This family confirms the folk wisdom that in a strong family children are always successful. Maria Ivanovna and Vladimir Spiridonovich died in one year. 1999 became for them fatal. In the beginning of the year left, the mother of Vladimir, and August 2, after his beloved wife followed and Vladimir Spiridonovich. Here's Leningrad tale of one family – "we loved each other and died in one day." This family managed to survive the war, the blockade and to preserve for a lifetime of love and loyalty to each other.
Is the advice useful?
Присоединяйтесь к нам
New advices