Rhodiola rosea (Golden root) is a perennial herbaceous plant of the family Crassulaceae. With the purpose of treatment using a ground part and roots. From the roots of prepare infusion, which is used in diseases of the nervous system. 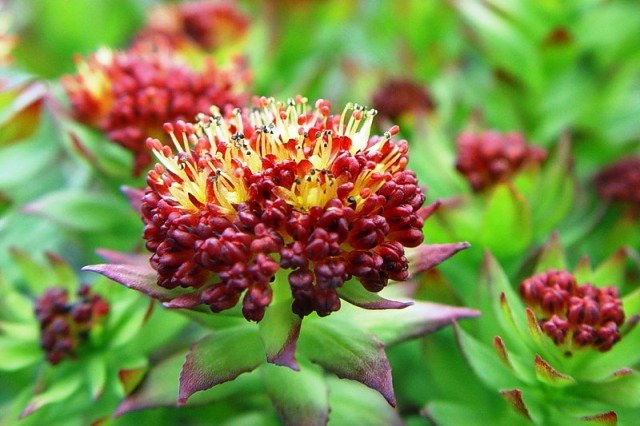 Tincture Rhodiola rosea is a remarkable therapeutic agent that has a tonic effect on the nervous system and increases efficiency. The tool has adaptogenic and a stimulating effect similar to the effect of drugs ginseng and Eleutherococcus. Tincture Rhodiola rosea contains a variety of biologically active substances: beta-sitosterol, organic acids, tannins. The drug increases the resistance to adverse environmental factors (hypoxia, temperature change and stress).

Tincture Rhodiola rosea reduces mental stress, increases physical and mental performance due to the normalization of energy metabolism. The drug promotes adaptation to climate change, time zones, exerts some antiarrhythmic action. Tincture Rhodiola rosea is prescribed for asthenic conditions, neurasthenia, fatigue, vegetative-vascular dystonia, as well as acineto-hypotonic syndrome, disorders in the sexual sphere (including erectile dysfunction). It can be purchased at the pharmacy or make your own.

How to cook and to take tincture of Rhodiola rosea

To prepare a tincture, crush 50 g of dried roots of Rhodiola rosea, place raw materials into a glass container, pour 500 ml of 40% alcohol (vodka). It is recommended to use a bottle of darkened glass. It must be clogging and remove for 20 days in a dark place. Then strain the tincture. Finished medicine store in a dark, cool place.

Take the drug 10-15 minutes before eating, preferably in the morning. Adults and adolescents appoint 5-10 drops 2-3 times a day. In asthenic or acineto-hypotonic syndrome, take 10 drops of means 2-3 times a day. With good endurance gradually increase the dose of the drug to 30-40 drops of the Course of treatment - 20 days.

Adverse effects of sledztwa include: insomnia, increased nervous irritability, instability of blood pressure, headache. May develop allergic reactions. Tincture of Rhodiola rosea is not prescribed in case of hypersensitivity to components, in severe hypertension, fever.

The drug is contraindicated during pregnancy and lactation, children under 12 years of age. Rhodiola rosea be used with caution in patients with diabetes, diseases of the cardiovascular system. While the use of tincture of Rhodiola and psychoactive agents observed a mutual enhancement of therapeutic effect.
Is the advice useful?
Присоединяйтесь к нам
New advices