How to make glued laminated timber

To buy the glued laminated timber in small quantities is very difficult. But he might need during the repair of the premises or furniture (for example, for saunas and baths). In this case, the rescue method of manufacturing the lumber with his own hands. 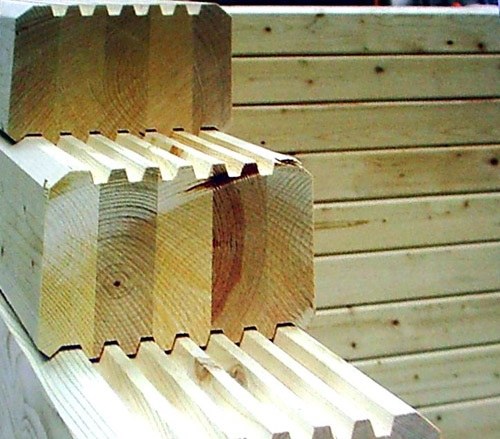 Related articles:
Laminated veneer lumber is a lumber, consisting of several glued together wood pieces. Made independently, it is more profitable for the factory, not only financially. Self-made lumber can be of any size, section, of a higher quality.


Regarding the last parameter from buyers of factory laminated veneer lumber received a lot of complaints. In order to save for gluing manufacturers often use wood of low quality, which determines the low strength characteristics of the finished product.

What you will need for self-production of laminated veneer lumber?

Boards, of which glue timber, called lamellae. They should be smooth, with no signs of rot, cracks, well dried, with minimal number of knots. The basic rule of bonding timber is as follows: the slats should be stowed so that their annual rings were mixed.


In addition wood should stock up on glue. Optimal use of PUR-Adhesive 510 FiberBond. The formula is designed for bonding wood, therefore, provide high joint strength of planks. But you can take any other, designed to work on wood. Of the tools you will need clamps, a hacksaw, solvent degreasing material, fire and bio protective composition, sandpaper medium grain.

How to make glued laminated timber with his own hands?

Glulam can be manufactured in three ways: by the method of connection of the three lamellae; the two lamellae, United by the letter Z; glued slats inserts. The most often used first because it is much easier and faster.


First make a selection of boards for gluing lumber, then stack them on one another so that the rings were sent in opposite directions. Then the Board should sign in pencil or marker. This precaution will allow not to mix the order of their installation.


Next, the Central Board from both sides of the handle with sandpaper, which will give it roughness. It will increase the adhesion of glue to wood. The lateral lamella is processed on only one side: the one that will be inside the timber.


Next is dust removal and degreasing of these surfaces with solvent and fire and bio protective composition. These liquids are alternately applied to the Board: first the solvent on the sanded surface, and after it dries – a protective impregnation. It covers all sides of the lumber, including the ends.


Then the slats applied to the adhesive layer of 1-2 mm. Boards stack on each other so that their ends formed a single plane on each side of the rail. Then the slats are fastened by clamps, which must defend from each other at a distance of 40-45 cm. drying of the adhesive is specified in the instructions to the composition, but it usually does not exceed 1-2 days.
Is the advice useful?
Присоединяйтесь к нам
New advices