Is considered a rarity to find in the woods mushroom podobovec or podobnik, and in common just a bruise. This kind of tubular Iuridus Boletus mushrooms that grow in deciduous forests and form mycorrhiza with lime trees and oaks. They can be confused with the white mushroom because of the great resemblance. 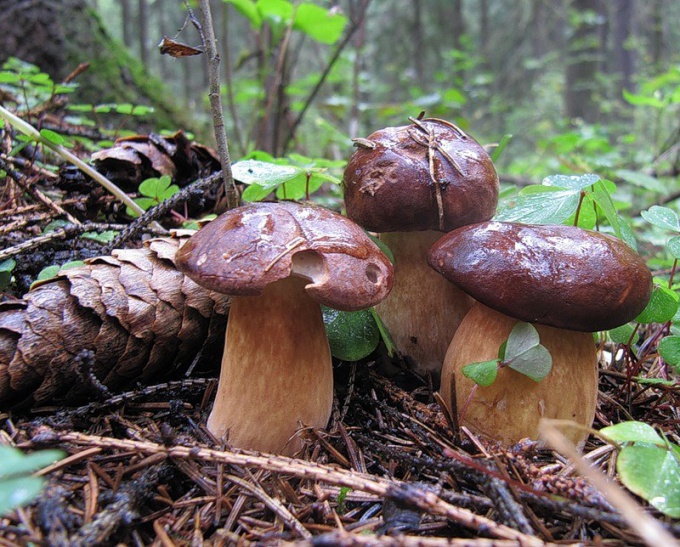 Fruit body poddubniy has a rounded hat and thick fleshy foot, slice the flesh it turns blue. Often you can find bitter analogue of the black – Boletus radicans, he's more like an overgrown flywheel and is inedible.

Poddubnyi begin to grow from the beginning of June, then take a break sometimes for a couple of months and since the beginning of August until the first frosts, they grow again. For hunters to find these mushrooms is considered a big success, because they are much rarer than others of their tubular counterparts. Poddubnyi have a good aroma, pleasant taste, why and in demand. It is worth noting that love them and forest rodents. Find no other instance can be considered a double success, because often bruises littered with the already stubby legs.

Stipe has the form of a cylindrical barrel forms a pronounced yellow color and a reddish mesh over the entire surface, its diameter is 2-5 cm, height 4-11 see Generally mushroom looks quite thick and chunky. At the ground leg somewhat thickened and has an almost Burgundy color. The flesh is red, but closer to the yellow hat. When cutting becomes green and then blue.

Hat can be different colors from light olive to orange, often even red. Surface velvety, smooth, dry. Old mushrooms when you click on it show the blue prints. At the beginning of the growth cap is tightly pressed to the stem, and the edges are bent downwards. Later, she reveals a little, but always remains spherical with a yellowish lower layer. Large mushrooms its diameter may reach 20 cm Spore powder of poddubniy has a dark yellow color, the tubular layer with a length of 15-30 mm. in Mature mushroom pores light green color, young specimen red, turning blue when pressed.

Poddubnyi edible mushrooms that can be used in boiled, fried, stewed, they make wonderful sauces. Their salted, pickled, dried. All the dishes they make are very tasty with a rich mushroom aroma. The first decoction after boiling, drain, re-cooking should take place for at least 15 minutes. In the processing poddubnyak on the arms can be bluish plaque, which is easily washed off with warm water and soap.

Raw mushrooms are slightly toxic, so use in this form, they are strictly prohibited. It is believed that even cooked boletus cannot be used in the food along with the alcohol.
Is the advice useful?
Подписывайтесь на наш канал