How to knit seamless socks on two needles

Warm cozy socks with no seam can be linked not only five needles, but on two. This technique of knitting has some advantages – no spokes, which interfere or tend to fall out of the loops. 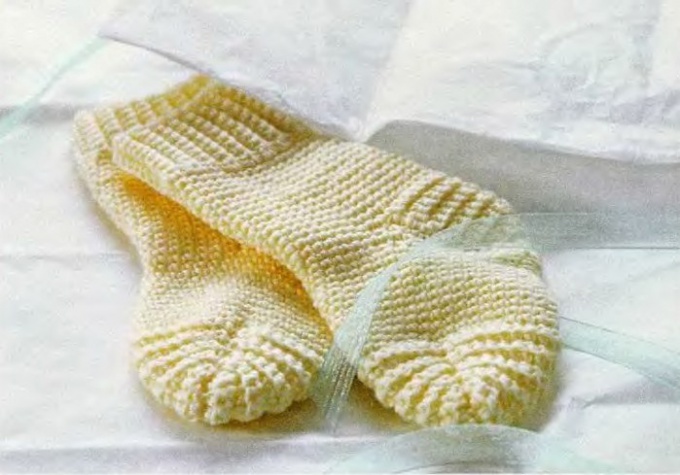 Knitting socks on two needles, start with the toe socks work without a seam. Take two strands: the working and additional (thin), place the main on the index finger, and the additional at large and dial the number of loops is equal to ½ of the required. If the four spokes you have a total of 48 loops (for large size), in this case, it will be 24. Incomplete knit rows, leaving both sides with one nepovezane loop in each row. When the needle will be knit in loops 1/3 of the total number, start, extend the series, vymazyvaja one left loop. Below diagonal is not formed in the holes, together with the loop-grab the broach.

Having finished knitting the toe, remove the extra thread the opened loop type on the third needle. Two spindles hold in left hand, right needle promazyvaya loop with the front cloth of the front, with the rear spokes do not remove promazyvaya, the thread should be ahead of work. Knit to end of row, alternating loops. The last loop provarite wrong. One freed the needle is put aside, it is not required. Work expand – loop that was not knit in knit facial − capture. It is very important that the thread was in front, then pulling will be on the wrong side of the product. You should get like a pipe.

Linking the desired length, start vyvazhivanii heel. Loop the top of the cloth, remove the additional needle and leave on the bottom panel do the heel as well as toe. After completing the heel, vivacite several ranks of pipes hosiery knitting and go elastic 2x2.

The number of start with the inside loop, the second is clear, third again knit purl, loop again clear, then there is front, 1 is removed, the following fit the front. Linking the desired height, close the loop, pulling them harder, so that the elastic was not very tight. Socks ready. But this is not the only method of knitting socks on two needles.

A simple way of knitting socks on two needles

You can tie the socks in another way, by working traditionally with gum. Take half of the loops from a desired amount, tie canvas flat elastic band 1x1 desired length and switch to stocking knit. Provarite a few rows and start vyvazhivanii heel. For this, gradually close the loop on two sides. When the needle will remain the third part of the dialed number, start to shape the heel – add loop, vymazyvaja them from the edge of the bench top knit in rows. Continue until the spoke will not appear the initial number of loops.

Then knit the sole to the toe, it vymazyvaja similarly heel. The next step is the knitting of the top. Povezav the series to end with the last loop-grab the bottom edge of the sock. Knit upper blade, while combining it with the sole. Dawasa gum, hinges close. The end of the thread seal on the reverse side.
Is the advice useful?
Подписывайтесь на наш канал