Which is better: Detralex or Antistax

"Detralex" and "Antistax" - medicines to treat and relieve symptoms of venous insufficiency and other vascular diseases. "Detralex" quickly and effectively improves the condition of blood vessels, and "Antistax" can be used as an additional prophylactic. 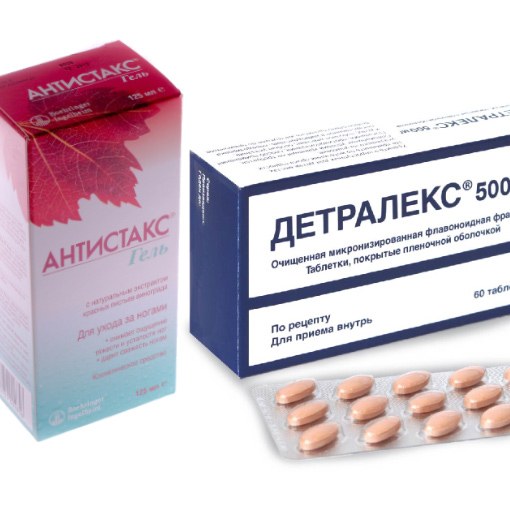 Related articles:
Drug "Detralex" and "Antistax" is used for the prevention and symptomatic treatment of diseases of the blood vessels. They can be used to relieve heavy legs, venous insufficiency treatment, relieving pain in the lower extremities.

"Detralex contains bioactive flavonoids and diosmin, "Antistax" contains an extract of grape leaves. "Antistax" refers to the means of cure and reduces the permeability of capillaries, and "Detralex" provides vasoprotective and venotonic effect.

"Detralex" reduces the flexibility of blood vessels, reduces venous congestion and capillary permeability. According to the results of clinical trials, "Detralex" is able to effectively improve the performance of the venous dynamics and increase venous tone.

In contrast to the "Detralex", "Antistats" such studies have not been conducted, and its effectiveness from a scientific point of view until proven.

Contained in Antistax" extract of red grape leaves is able to protect the walls of blood vessels, increase their elasticity and decrease vascular permeability. This leads to the fact that the plasma and the contained proteins and water will not pass into the surrounding tissues and do not cause the formation of new edema.

Pregnant women doctors recommend the use of "Detralex". The study of this drug in animals have not revealed any side effects. Incidents of unwanted effects in pregnant women during the application "Detralex" is still not mentioned. In contrast to the "Detralex", "Antistax" use during pregnancy is not recommended.

Which drugs are best?

"Detralex" and "Antistax" differ in efficiency. If "Detralex" quickly improves the condition of the veins, "Antistax" can only be used as a prophylactic. It contained components help with vascular diseases only in the case of long-term medication.

At the same time, "Detralex" can relieve the symptoms of venous insufficiency and to improve vascular tone, even after taking two tablets. Therefore, during the exacerbation, it is recommended to take Detralex", and "Antistax" to use as an additional means of lowering the permeability of capillaries and improves the elasticity of blood vessels.
Is the advice useful?
See also
Присоединяйтесь к нам
New advices