How to tie climbing roses

Growing climbing roses – troublesome. But if you put not Dutch varieties, and domestic breeding, it is possible to on your site a decorative arch or arbor, thickly strewn with roses. 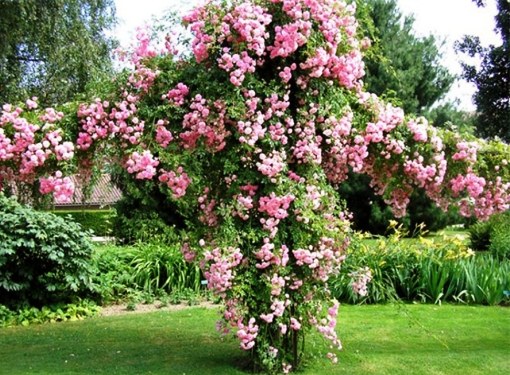 Related articles:
The formation of

The height of climbing roses can reach seven meters. Mandatory conditions for successful cultivation are a Sunny location, regular pruning garter to the supports before the beginning of the growing season and removal from the supports, followed by thorough shelter vines for the winter.

The right garter climbing roses stimulates the formation of new colors, so the whip tied up so that they are horizontal or in the form of a spiral (for climbing species). Vertical consolidation of the shoots stimulates the growth of a large number of leaf mass and residual shoots, making the shrubs more luxuriant, but the flowering will be thus weak and short-lived. Feature of climbing roses is that the flowers appear along the entire length of the stems formed horizontally.

Young climbing roses needs to be formed initially, their shoots grow in the direction you want. The main shoots are distributed on the wall, pillar or fence in a fan, it stimulates the formation of numerous lateral branches. If the climbing rose is grown around the pole or column, its whips are fixed on a support in a spiral.

Climbing roses have no tendrils, as other climbing vines. They do not have the ability, like curly vines to twine around supports, so they must tie to the support wire. The wire should be in a plastic coil. Metal wire for these purposes is not suitable. You can use twine, but the wire to work.

Firmly snap the whip is not necessary. When wrapping the wire must remain free space, since the whip will continue to grow not only in length but also in thickness. It is very important not to tighten the wire or rope too tightly, so as not to damage shoots.

Use in landscape design

Supports for climbing roses can be installed in any corner of the garden: of the door or gate, over the track, at the entrance to the house, the walls of the house. Support can serve as a fence, gazebo. An interesting element of landscape design will be the tower of roses when the plants are grouped around the high counter and encircle her.

Climbing roses are often used to decorate the walls of country houses. They are best placed under the window, not the wall between the Windows. This will cause the Bush to grow in width. To the wall of roses tied with special wire bracket, one side driven into the wall.
Climbing roses can drape not only fences and poles.

Looks very nice old tree, entwined with climbing roses. But it is best to clip the rose stems on a coarse wooden lattice with a cell size of 30x30 cm To the grid it is convenient to bind the whip of roses, and then easily untie and remove them for the winter to put in the shelter.
Is the advice useful?
Присоединяйтесь к нам
New advices