What is the difference between drying, bagels and bagels

Drying, bagels and the bagels are United by the fact that they are made from the same ingredients under the same technique - a preliminary steaming ring-shaped bakery products with subsequent baking. Only the bagels have a biscuit dough consistency, and drying are smaller and stronger than baked. Virtually the same product has different names, due to the linguistic characteristics of the places where they first appeared. 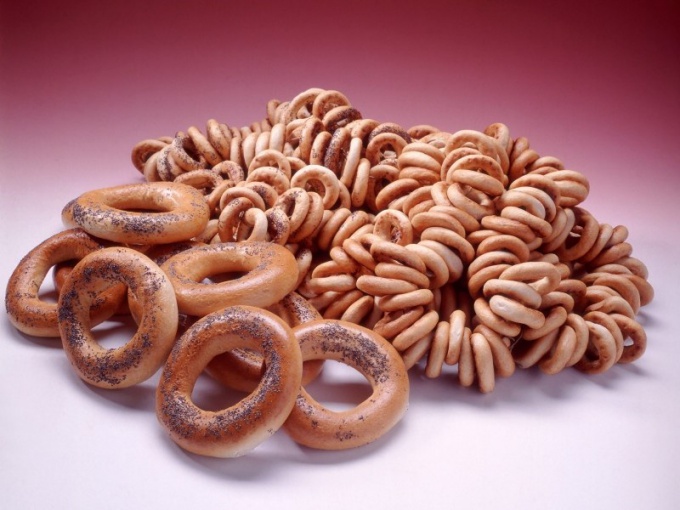 Related articles:
Bagels, bagels and drying in a modern bakery production belong to the same item – name- the doughnuts. Perhaps that is why many consumers do not think too much about the intricacies of the differences between these ring-shaped bread treats. Especially in the last baking time on the shelves and much more. But there was a time when much later traditional for Russia, the loaf and the loaf, were these products. The most expensive Goodies for the kids from parents who came from the fair, was a bundle of flavored bagels, which are often showered with poppy seeds.

What do bagels, a bagel and drying

No need to be an expert, to highlight a common feature of these three grain products - the wiring of dough, twisted into the form of a ring. But, oddly enough, it does not affect the appearance of names, which is not the resemblance, and production technology. I must say that the composition of the products required for the manufacture of dry baked and confectionary products, they are absolutely similar. Classic bagels are made from flour, salt and yeast, but the secret lies in their preliminary steaming.

Only after dropping the bagels into boiling water or milk, they go into the oven. Time obvalivanie depends on how quickly the bagels will float to the surface. This usually happens within 15-20 seconds. Therefore, the original donut called alvarengai, barankami, barankami ("oberek" in Ukrainian), and finally transformed to the usual today – bagel.

In the manufacture of bagels today do not use boiling water, just douse them with hot steam, but the name remains the same. Drying for the ability for long-term storage is sometimes called bread canned food, because they are bagels, but only a thin and highly dried. That is the definition you can find in the dictionary Dahl. For the first time the name of a small donut — "drying" was written as a dialect of Voronezh province in 1858, but it gradually took its place in the literary language. Although in the Pskov and Novgorod provinces long dry little wheel equal in diameter 2-4 cm, called the lamb.

And then the bagel?

It is believed that the word "bagel" and the technology of cooking appeared in Russia thanks to the Belarusians, bagels is distributed all Eastern European Jews living on the territory of Ukraine. Due to this fact for a long time bagels and drying on the shelves was called "Moscow" and bagels "Odessa". But the technology of manufacturing the bagels still implies their obligatory steaming. However, the dough for bagels is more rich and loose and the products themselves sdobrivayut a variety of toppings or fillings. Sometimes these ingredients are already added to the dough.

This is typical for this kind of baking characteristic as the splendor and looseness, reflected in the title - bagel. The word "Babel" without the diminutive suffix always existed in the Slavic languages, and Ukrainian, too. It meant the sound that appears when the bursting bubbles. To publicise, that is to sulk, to bubble. Bagels became widespread in Russia only in the nineteenth century, while in Europe they are known from the seventeenth under the name "the bagel" - the stirrup, but it does not diminish the importance of the Jews in their invention. On the contrary, legend has it that the first bagel was baked by a pastry chef-a Jew from Vienna in gratitude for the victory over the Turks and presented to the king of the Polish-Lithuanian Duchy of Jan Sobieski, who was a true connoisseur of horses. So, a muffin with a hole in the middle of the stirrup began its triumphal March around the world.
Is the advice useful?
Присоединяйтесь к нам
New advices