How does hydrogen peroxide 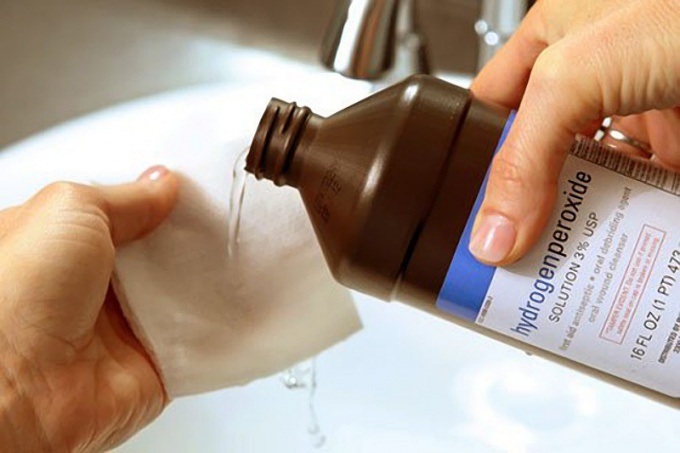 Related articles:
You will need
Instruction
1
H2O2 i.e. hydrogen peroxide, in our time, is a great success. Medicine used various preparations on the basis of H2O2, which can easily buy in pharmacies. Depending on the concentration of peroxide has a bacteriostatic and bactericidal effect on microorganisms. Also, it can have a deodorizing effect, and in high concentrations when applied to the skin, irritating the place that is ingested, and may cause depigmentation of the skin or mucous membranes.
2
The action of the peroxide is due to the fact that when in contact with living tissue it begins to decompose. This releases molecular oxygen, which promotes oxidation of organic components of different cells. The decomposition of peroxide oxygen is released so vigorously that the solution foams.
3
The resulting in contact with the fabric foam AIDS in the mechanical cleansing of the damage and wounds. Along with the foam removed from the wound debris, bacteria, necrotic tissue, purulent discharge and so on. A solution of hydrogen peroxide is able by foaming to provide the hemostatic effect of a small bleeding.
4
The diluted solution of hydrogen peroxide in one hundred milliliters contains perhydrol – 10 g, 0,05 g of a stabilizer, about 100 ml of water. The hydrogen peroxide it contains in the amount of three percent. This liquid has no color, nor smell or it is very weakly expressed. The liquid quickly decomposes, releasing oxygen, when exposed to light, when heated, in contact with oxidizing or reducing substances, some metals and alkalis.
Note
H2O2 is traditionally administered topically. Peroxide is successfully used for washing wounds or gynecological diseases. The drug is very effective in stomatitis, angina rinse it very able to help.

Hydrogen peroxide is recommended as a hemostatic means of local action to stop minor capillary bleeding.
Useful advice
A concentrated solution of peroxide used pure or in ointments as a depigmenting agent, and when mixed with detergents in order to disinfect and decontaminate a room. Add it allows to obtain solutions, which are used as antiseptics.

Gidroperit – another drug, which is a compound of urea and hydrogen peroxide. Available in the form of white tablets, which dissolve easily in water. To prepare a gargle for the mouth, it is generally recommended to dissolve the tablet in a glass of warm water. But it should be borne in mind that antimicrobial effect on a short time – separation of oxygen from solution occurs rapidly.
Is the advice useful?
See also
Подписывайтесь на наш канал