Causes birth of children with down syndrome

Down syndrome is a congenital pathology, which is found more often. According to statistics, this form of mental retardation has about 10% of newborns. 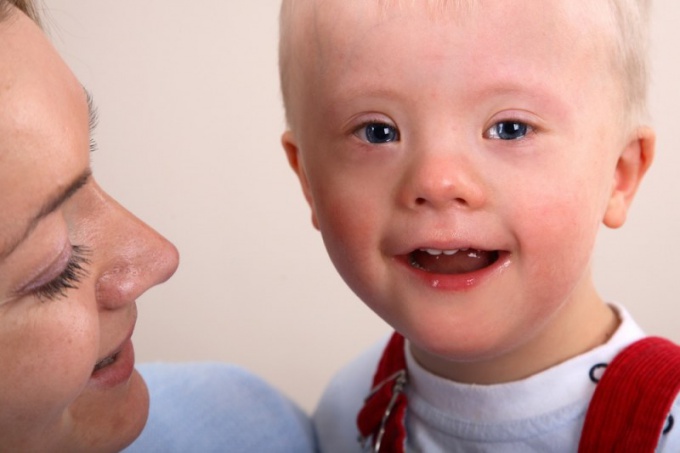 Down syndrome: the causes of

In the normal cells of the human body contain 23 pairs of chromosomes. One chromosome of each pair inherited from the father and another from mother. Genetic mechanisms of development of down syndrome are quantitative violation of the autosomes, when the 21st pair of chromosomes with extra genetic material. Traits that are characteristic of down syndrome, detects the presence of trisomy for 21 chromosome.

The occurrence of additional chromosomes may be due to a genetic accident, a violation of cell division after fertilization or inheriting a genetic mutation from the father or mother. With these mechanisms in genetics there are 3 variant of karyotype anomalies in this syndrome:
- mosaicism;
- simple (regular) trisomy;
- unbalanced translocation.

Approximately 94% of the cases of down syndrome due to regular trisomy. With three copies of chromosome 21 are present in all cells because of the violation of separation of paired chromosomes during the period of meiosis in paternal or maternal germ cells.

About 1-2% of cases of this syndrome have the mosaic form, due to impaired mitosis, only one cell of the embryo, which is at the stage of gastrula or blastula. When mosaicism trisomy of chromosome 21 revealed only derivatives of this cell. The rest of the cell has a normal chromosome set.

In 4-5% of patients found translocation form of down syndrome. In this case, chromosome 21 or its fragment translocases (attached) to any of the autosomes and moves with it during meiosis in the newly formed cell. The most frequent "objects" translocation of chromosomes 14 and 15, at least – 22, 13, 4, and 5.

This alteration of chromosomes might be a Fluke or it can be inherited from one parent who is a carrier of a balanced translocation and a normal phenotype. In the case when a carrier of the translocation serves a father, the possibility of the birth of a baby with down syndrome is only 3%. If the carriage is associated with genetic material of the mother, the probability increases to 10-15%.

Factors that increase the probability of having children with down syndrome

The birth of a child with this syndrome is not related to lifestyle, region of residence and ethnicity of the parents. The only established factor which increases the probability of the occurrence of such a child is the mother's age.

In particular, if in women under 25 years, the risk of a sick child has only a 1 in 1400, 35 years is 1 in 400, to 40 - 1 to 100, to 45 1 to 35. This is due, primarily, to increased risk of nearshore chromosomes and reduced control over the process of cell division. Nevertheless, statistics says that 80% of children with down syndrome are born to mothers under 35. This is due to the fact that the birth rate among young women is higher. According to some, also increases the risk of the child such abnormalities age of father more than 42 to 45 years.

In the presence of this syndrome in one of monozygotic twins, this pathology in 100% of cases will be available at the second. Have raznjatovic twins, and brothers and sisters of the possibility of such a coincidence is extremely small.

Among other risk factors include: maternal age less than 18 years, presence in family of people with down syndrome, carriers of one of the spouses translocation, blizkorodstvennykh marriage, as well as random events that disturb proper development of germ cells, or germ.

By conducting preimplantational diagnosis conception using assisted reproductive technologies significantly reduces the probability of a child with this syndrome have parents at risk.
Is the advice useful?
Присоединяйтесь к нам
New advices