The gentian flowers are blooming

Buckwheat – an annual member of the family Polygonaceae – the most important crop cereal crop after wheat, rye and barley. In addition buckwheat, due to its flowering, is a valuable melliferous culture. 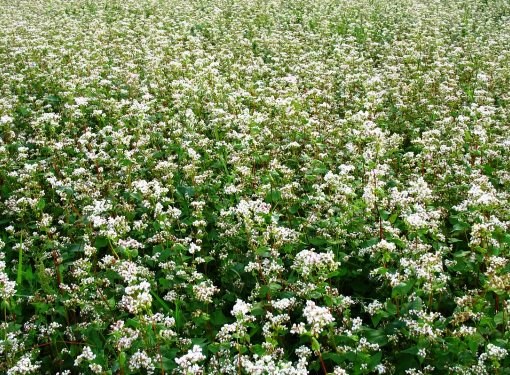 What kind of plant.

In the European part of Russia, Kazakhstan, Siberia and the far East buckwheat is not only used for the production of clumps of buckwheat, but also as a honey plant. Buckwheat has a ribbed stem height of about two feet. It has 8 to 10 side branches. The leaves are alternate, cordate-triangular. Buckwheat flowers are white or pink-white hue, bisexual, with stamens of different lengths. Arranged in corymbose inflorescences, which are located at the ends of axillary branches. The flower of buckwheat has 8 nectaries (number of stamens). The pollen of the flower is dark yellow.

Beginning of flowering buckwheat at the end of July. A buckwheat field in bloom looks very nice – though shrouded in whitish-pink cloud. The flowering period is long – over a month. One plant during this time is about thousands of flowers, each of which blooms for only one day. The nectar that they secrete, are willing to collect bees, especially in warm weather (26°C). When humidity increases to 80% sugar content of nectar increases, so buckwheat honey quickly kristallizuetsya.

Per hectare sown buckwheat bees for the season, collect up to 100 kilograms of honey. Honey gathered from buckwheat, is a very valuable and healing. It has a brown tint, has a sharp taste and strong aroma.

Bees not only collect the nectar from the flowers of buckwheat, but also pollinate the crop increases its yield. So bees-pollinators in the flowering period of buckwheat and specifically brought to the fields, exposing 3-4 hives per hectare. If late delivery of bees for a couple of days and miss the beginning of flowering buckwheat, each hectare lost up to 6 kg of honey.

When mineral fertilizers the nectar of the flowers of buckwheat stands out much more. And the seeds of buckwheat are tied more, if bees visit each flower several times. Therefore, buckwheat is sown in wide rows, and its predecessors are usually legumes or winter.

In order to extend the flowering buckwheat and time of honey flow, seeded it twice or three times per season with an interval of 10-15 days. Buckwheat seeds can be sown quite early, as soon as the soil warms up to 12°C. And buckwheat blooms throughout August. At this time, other nectarines already finished flowering, so the flowers of buckwheat are the only source of nectar for the industrious bees.
Is the advice useful?
Присоединяйтесь к нам
New advices