What changes did the appearance of Michael Jackson

Michael Jackson died 25 June 2009. The cause of death of 51-year-old musician has led to numerous plastic surgeries and a large amount of drugs he was taking for several decades. Debate about why the American king of pop so often resorted to the help of doctors, do not cease till now. 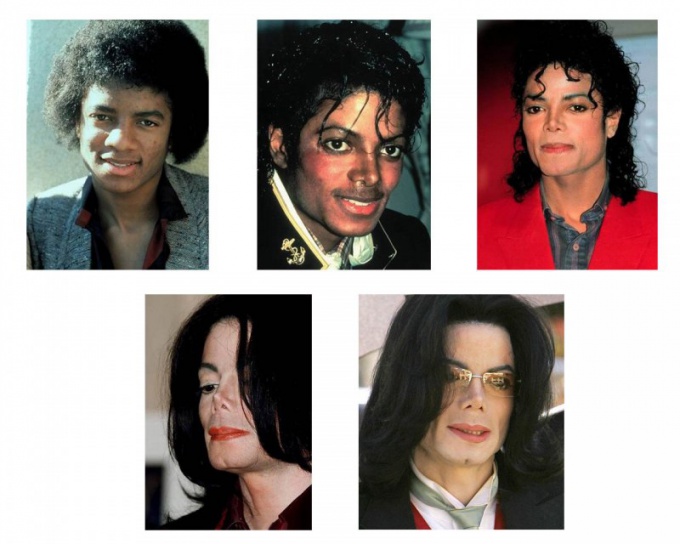 Michael Jackson has inherited the dark skin and facial features from African American parents. However, in 1979 became the first notable changes: hue epithelium became lighter than before. There were rumors that the 21-year-old and already a very popular musician specially whiten skin. Over the next few years it became apparent that the facial features Michael also changed. Journalists actively "hyped" version of conscious change of appearance by Jackson. They were convinced that the perpetrator wants to be the most similar to the representative of the Caucasoid, not Negroid race.

In 1986, doctors put Michael Jackson just two of the terrible diagnosis: vitiligo and systemic lupus erythematosus. Vitiligo is a genetic disease, manifested by the appearance on the skin pigmentation. The sunlight makes the color of the epithelium uneven. The first years of the singer concealed the blemishes on the face using the complex make-up, and the hands with gloves. Because of lupus on the body of Jackson was a rash, lesions which resembled the shape of a butterfly. Doctors say that in the 80s lupus the pop idol was in remission, but the sunlight, the constant physical and psychological stress, vitiligo and a number of other factors caused her aggravation. The health of Michael Jackson was seriously undermined by the admission of a large number of potent drugs: salahin, Anohina, tretinoin and hydroxychloroquine.

Michael Jackson kept a strict diet that when serious physical loads and constant stress associated with live concerts, made his body lean, and the character is almost unbearable.

Specialists in plastic surgery, analysed the photographs of Michael Jackson, claimed the singer had undergone several dozen operations. Biographer Randy Taraborelli in the book about Jackson writes that for the first time under the knife Michael formed in 1979. Rhinoplasty is needed by the musician to correct the shape of the nose, broken during the dance. To correct the consequences of this operation, Jackson in 1980 falls on re-rhinoplasty by another doctor. Jackson himself claimed that in the early ' 80s, consciously and even made a dimple on my chin, but more on the plastic surgery did not agree. Since 1986, Michael Jackson regularly visited Arnold Klein, who performed non-surgical cosmetic treatments and doing subcutaneous injections.

Relatives of Michael Jackson claim that he made at least 20 different plastic surgeries. Wide nose typical of the Negroid race, the doctors gave him a narrow triangular nose is almost without wings. Over time, the skin is atrophied, the implant has disappeared (according to various reports: fell, resolved, was specifically removed). In September 2004, the German surgeon Werner Mang had a difficult nose reconstruction of Jackson, using cartilage from the ear of the singer. In addition, Jackson has repeatedly changed the shape of the chin (usually because of the inserted implant), cheeks, lips. The singer did the suspenders and adjust the shape of the eye.
Is the advice useful?
Присоединяйтесь к нам
New advices