Which parrot speaks the best of all

The ability of parrots to talk have always impressed and attracted the attention of man to these birds. The opinion that the pet speaks the words deliberately, unfortunately, wrong. The repeating human speech it is only natural need a parrot to communicate. 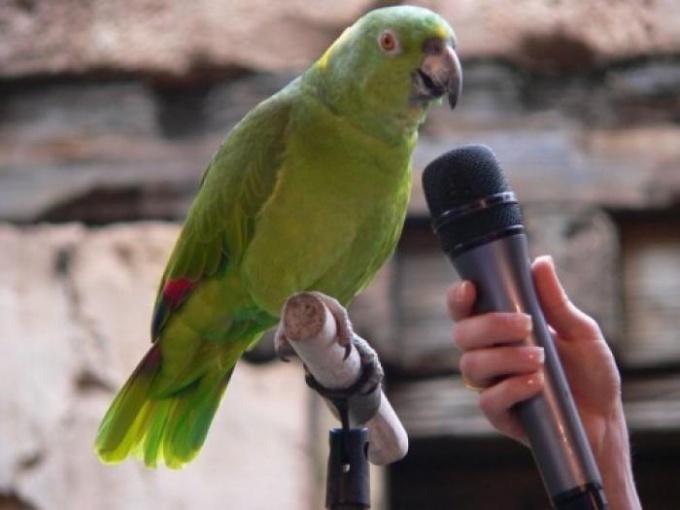 Related articles:
In the natural environment, in his flock, parrots are very sociable, that they just need, like food and drink. Getting into alien space, in the unknown world, which for poultry, in most cases, confined to a cell and the room where it is located, in this way they create an atmosphere familiar to themselves, make up for the lack of communication. Over time the parrot begins to consider the family of the man her pack and makes no attempt to communicate in the language of this pack, so live in it, becoming part of it. The ability to speak affects not only the breed of the bird and its natural talents, but the atmosphere in the house, the attitude of others and the feeling of absolute security.

The most "talkative" breeds of parrots

Before buying a parrot becomes important, of course, the question of what the parrot says is the best. Each breed these birds good in its own way, somewhat superior to their countrymen, with something inferior. For example, Ara perfectly imitates the sounds, and squeaking or grinding noise get them best. Birds of this breed are precisely reproduce the sound of the old door hinges, the cough of an elderly person, happy to repeat the barking of dogs, mooing cows and even the sounds of machine gun fire! In imitation of human speech in Ara, unfortunately, success is not so good.

But cockatoos are able to remember more than 4 dozen words and demonstrates their speaking abilities in the early morning or late evening, and in a very loud voice to attract the attention of the owner. Excellent acting and ability to breed cockatoo – wanting to please a man, it takes the most bizarre postures, which are difficult to repeat even a professional acrobat.

Most capable are considered parrots Jaco. There are the cases when specimens of this breed have learned more than 2000 words, saying them with different intonation setting ... and the theme of "conversation." But Jaco is able to learn only while they're Chicks and adult bird to teach to talk anymore.

No less capable Amazon, but they are less popular because of the excessive reticence and seriousness. The fact is that these birds do not tolerate captivity and living in an alien environment and, especially, in the cell.

Popular parrots are no different special abilities in terms of learning human speech, characterized up to 20 words and pronounce them quite rarely. Their advantages in simplicity and fast adaptation to any situation.

Training – the secrets of success

The ideal age for training birds is considered to be 3 months. The first step is to earn the trust and friendship of the birds, to accustom her to the name. The name should be simple in terms of pronunciation, it's the first, which later will tell pet. The cage should be in a public place in the room where often the whole family. At the initial stage of training a parrot can learn only 5-7 words, so you cannot load it with a large flow of diverse phrases. Lessons should take place in absolute silence, external sound sources (TV, radio) need to turn off, in addition, you cannot change the tone and rhythm.
Is the advice useful?
Подписывайтесь на наш канал