How to do braids

Braids have always been relevant way of styling long hair. With the help of braids can be made as simple hairstyles for every day and festive, with the addition of curls or accessories. 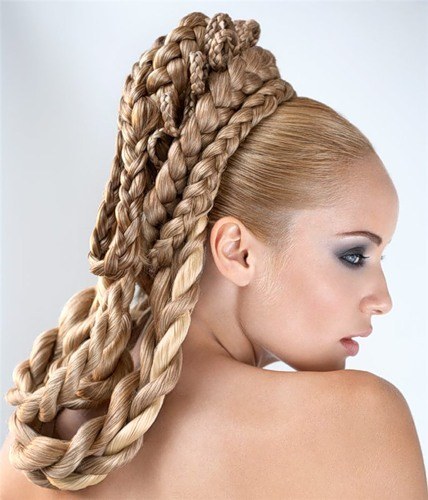 Related articles:
Instruction
1
A regular braid is called a spike, she weaves the two strands of hair. Variably shift a small portion of hair from one strand to another. Originality different braids, woven from four or five strands. In this case, whipping them separately, given the feature – they have one common strand in the middle of the weave.
2
Particularly popular is the so-called Greek island KOs. Apply a small amount of foam or mousse for styling on damp washed hair. Dry them with a Hairdryer. Then divide the hair into two transverse parting from ear to ear. To the remaining mass of hair not disturbed in the future, secure it with the clamp. Then, select the strand of hair over the left ear, divide it into three parts and begin to weave a normal ear, adding new strands alternately right and left. To make it easier, satelite the entire front of the mass of hair in the direction of weaving braids. Bring ear to right ear. Then from the remaining mass of hair braid normal braid. Mask the tip with the help of pins. You can leave the remaining hair loose combination of the Greek oblique looks very impressive.
3
Braiding the fishtail does not take much time, although from the outside and seems to make their own hands simply impossible. Divide the hair into two equal parts by a straight parting. Take a thin strand of hair from the left side and connect with the part from the right. Then select a thin strand from the right side of the hair and connect the same from the left. Continue until the end lengths of hair. This hairstyle looks very reminiscent of a fish tail.
4
Braids "dragon" create the illusion of hair, they are trailing at a distance of five or six inches from the hairline. Make a horizontal parting formed in the front strand divide into 3 parts and start to weave a normal braid. As netting capture with a comb a few loose hair from each side and add them to the main braid. When the braid is finished, secure it with a rubber band and start braiding the following. The resulting mass of braids wrap to the inside or gather on the back in one large braid. This kind of weaving is suitable for owners of medium length hair.
Is the advice useful?
Подписывайтесь на наш канал