Celandine is a perennial herbaceous plant that belongs to the family of the poppy. The plant contains many different alkaloids and it is therefore considered poisonous, but despite this, is a cure for many ailments. 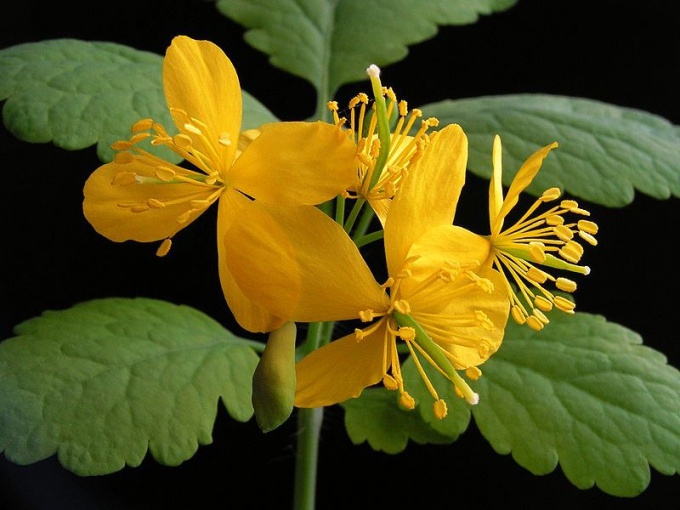 Related articles:
Instruction
1
Celandine is a perennial herbaceous plant from 30 to 100 cm in height. If the damage of the whole plant, especially the roots, secretes a juice, which is in the air very quickly becomes an orange color. The root of celandine branched, red-brown outside and yellow-orange inside, which grows several stems. Stem erect, branched, knotty, covered with hairs. The leaves are bluish bottom, and the top is light green. Lower leaves alternate, long-petiolate, and the upper almost sessile, round or ovoid, jagged pieces that converge at the base of the down. The flowers of this plant are Golden-yellow, on long stalks, have four wreaths, which are collected in small umbrellas. Fruit of celandine – double leaf box.
2
Celandine blooms from the end of may and almost all summer. Grows on muddy places, often in the shade near houses throughout the country. A lot of the plant on roadsides in rural areas.
3
Collect all plant at the end of may during a most rapid flowering. Sometimes cut off only the top. Celandine is dried in well-ventilated areas in attics. At harvest plants should not be touching your eyes, nose or mouth. And after working with celandine should be carefully wash hands. Celandine is used to treat various diseases namely jaundice and gall stones, convulsions, chest pain, dyspnea and asthmatic coughs, to treat colds, stomach pain, constipation, diseases of the spleen and rheumatic pains.
4
At constant rheumatic pains and pain in the joints you need 1 tablespoon of the mixture consisting of an equal number of shoots of nightshade sweet-bitter, flowers, Arnica and hawthorn prickly, grass violet tricolor, leaves of European wild ginger, herb and roots of celandine ordinary, horsetail grass and bark Kruchinina, pour 1 Cup of boiling water. Insist 2 hours and drink warm 0.25 cups three times a day.
5
The plant is very rich in vitamins. Celandine contains vitamin a, ascorbic acid, many organic acids, essential oil, flavonoids, saponins and alkaloids 14. Particularly rich in alkaloids of the root of a plant.
6
Experiments show that the preparations of celandine is able to inhibit the growth of malignant tumors. So celandine began to be used as a medicinal and prophylactic remedy against cancer. In such cases, the infusion should be taken in the form of tea. One Cup of boiling water, pour a tablespoon of chopped plants and infuse for 2 hours. Drink 100 ml three times a day.
7
Warm you need to drink this infusion with cholecystitis, cholelithiasis, severe cough, dyspnea, bronchial asthma, angina pectoris, and all diseases caused by smooth muscle spasm.
Is the advice useful?
See also
Подписывайтесь на наш канал