Papilloma – a benign tumor on the surface of the skin caused by the virus papillomavirus human (HPV). Contracting this virus can be sexually transmitted, and contact-household way, so it hurts about 80% of the world population. The body papilloma consists of epithelium and connective tissue, its size varies from 2 to 15 mm. in Itself, this tumor is not dangerous for a person to remove it is not necessarily necessary to treat the virus. 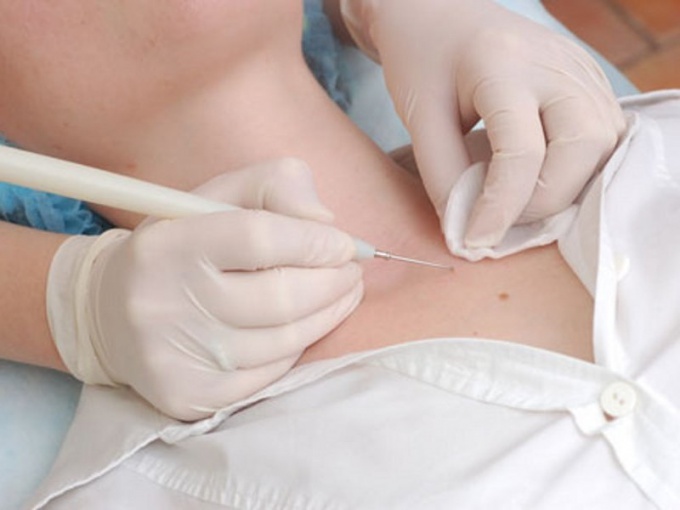 Urgent need for removal of papillomas, no, as they do not threaten human life. But to remove them is for three reasons. First, HPV is a pretty noticeable cosmetic flaw, and secondly, there is the possibility that irradiation with ultraviolet rays, or trauma of tumors, which can lead to malignant corruption. And third, some tumors cause pain.

There are many ways of removing warts.


Electrocoagulation. This is the most popular method of removing tumors, which consists in cauterization by a current. Use a high-frequency current leading to the withdrawal of protein tissues.


The advantage of electrocoagulation is that the likelihood of infection and bleeding is very small. There is also a possibility for later histological analysis of tissue removed, as the papilloma are not completely burned, but only dried and separated itself from the skin.


The disadvantage is the risk of scarring and repeated relapses spot removal.


Cryotherapy. Is freezing the tumors with liquid nitrogen. Apply to the warts dipped in liquid nitrogen applicator. It becomes hard, darkens and begins to separate from the skin.


This method removes flat and benign papillomas. Cryotherapy is often used for the removal of tumors from the surface of the mucous membranes.


Laser destruction. This is the most modern and least traumatic way. With it you can completely remove the cells of the papillomas without hitting the surrounding healthy tissue.


The laser removes tumors of any size and in layers at any depth. The advantage of this method is that it leaves no scars and very rarely leads to complications.


Radiosurgery. Tumors can also be removed with a special device that generates radio waves and dissecting tissue. This method leaves no swelling and burns. Best of all eliminates a small papilloma. Not suitable for malignant tumors.


Chemical methods. To remove warts by using chemicals. It's cheap, but ineffective and not always a safe procedure. Deprecated method.


The surgical method. This cutting formations with a scalpel under local anesthesia. Leaves scars, so also a thing of the past.


Choosing a method of removal of papillomas, be sure to consult with your doctor.
Is the advice useful?
See also
Присоединяйтесь к нам
New advices