Stay in Pyatigorsk – the best choice for those who like to enjoy the beautiful views of nature and wants to improve their health. In Pyatigorsk there are many specialized health centers that have a variety of natural medicinal resources. There are all conditions to make the stay comfortable and healthy. 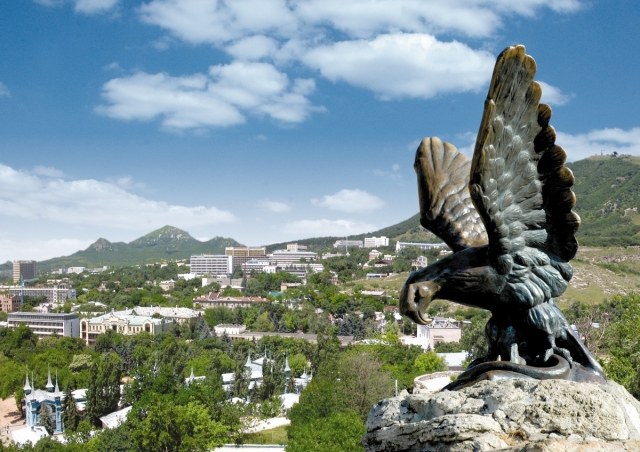 Each year in the sanatorium of Pyatigorsk come on rest and treatment of thousands of tourists from all over Russia and CIS countries. The climate here is moderately continental, winter is mild, frosts are rare. Early spring and a long autumn provide an opportunity for year-round recreation.

On the bases of the resorts we offer many unique treatments, including radon and hydrogen sulfide baths, mud treatment from the lake Tambukan, which is located in the vicinity of the city.

Motels resorts spetsializiruyutsya for the treatment of urological and gynecological diseases, diseases of musculoskeletal system, skin and upper respiratory tract.

In Pyatigorsk are children's sanatoriums, which deservedly have a high trust rating at quite affordable prices.

In most of the health resorts of Pyatigorsk in recent years undergone major refurbishment and upgrading of rooms, making the stay there as comfortable as possible. Along with luxury resorts, there is a large number of budget resorts.

Pyatigorsk is situated in a unique location, surrounded by five mountains. Many of the resorts located at the foot of Mashuk mountain, which became the symbol of this small but beautiful resort.

The Sights Of Pyatigorsk

In addition to the treatment in Pyatigorsk so many beautiful and unusual places that every tourist should visit during your stay.

The Cathedral was built by the project of world famous architects - the brothers Bernardazzi. Nearby is located the oldest cemetery in the city, where the first burial place of the great Russian writer and poet Mikhail Lermontov.

It is possible to climb to the top of Mashuk mountain and enjoy the beautiful views of the city and its environs. By the way, to get down the mountain better than walking along a specially laid asphalt road, surrounded on all sides by forest.

It is a unique monument created by nature itself. In the mountain crater with a depth of over 40 meters, which was filled with underground water a bright turquoise color with a specific smell. The path to the lake lies through a specially cut through the tunnel. To bathe it is impossible, but an extraordinary spectacle. There is also the famous monument to Ostap Bender is a favorite place for many vacationers photo shoots.

In this Park are well-known character of Ilf and Petrov Jon begging. This moment is immortalized in a small monument Ippolit Matveyevich, which is located almost at the entrance and is a city landmark. Park "Flower garden" is one of the favorite places for citizens and guests of the resort.

It was installed for the 100th anniversary of Pyatigorsk, and became a symbol of the region of Caucasian Mineral Waters. The sculpture is located on mount "Hot", which rises immediately behind the Park "Flower garden". On a Hot mountain other attractions: "Diana's Grotto, Grotto of Lermontov", "Aeolian harp" and "Chinese pavilion".

The site of the duel Lermontov

It is located in the North-Western slope of mount Mashuk. On the death of the poet the monument.

It is the biggest racing hippodromes in Russia. Here you can try your luck and place a bet on any horse. Racecourse has recently been modernised and has no analogues in Russia.
Is the advice useful?
See also
Подписывайтесь на наш канал