How many kilobytes in megabytes, gigabytes and terabytes

Kilobytes, megabytes, gigabytes, terabytes - system of measurement of information storage on personal computers. Users are regularly faced with these concepts when you install any software on your computer. 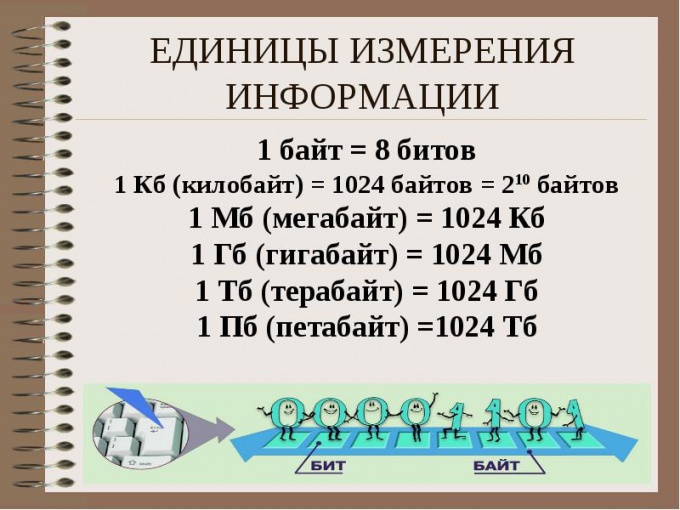 The number of kilobytes

Personal computer users often encounter such concepts as kilobytes, megabytes, gigabytes and terabytes. First, you must say that kilobytes, megabytes, and other - system measurement information on a personal computer. Perhaps, if the installation of a software faced with the fact that the program has indicated the amount of space that it will occupy after installation. Each program or file takes on a personal computer with a specified space. Novice users may have some problems with the measurements. It should be remembered that each concept implies a certain amount of occupied space. For example, is stored in kilobyte 1 024 bytes, a megabyte is 1,024 kilobytes, gigabytes stored 1 048 576 bytes and a terabyte is 1 000 000 000 kilobytes.

Each of these terms is indicated in abbreviated form (as seen above). It was customary for people to better assimilate the number of required memory and the number was recorded in a shortened form. Each of these names indicates the requested amount of memory.

Some of the PC users quite often confuse kilobytes with kilobits, megabytes, megabits and so on. Perhaps, often novice users of personal computers, a question arises. Especially sharply it arises when they start to download something from the Internet and see that the speed differs from the stated (according to users). Unfortunately, such people are mistaken, as the difference between the concepts.

First, it is necessary to say that these are the kilobytes/kilobits, megabytes/megabits differently. For example, the kilobytes/kilobits are denoted by KB/s and Kb/s, respectively. This difference in the other measurements. Of course, that the differences don't end there. You should also understand that the Kbytes is the amount of downloaded data, and kilobits the speed.

In order to understand how quickly will be uploaded or that the amount of memory necessary to carry out the simplest calculations. For example, the ISP was claimed speed of 512 Kb/s. In order to calculate the amount of memory you need to divide 512 by 8 (since one byte is exactly 8 bits), and the result is 64 KB/s. Using these simple calculations, it is possible to obtain a number representing the volume.
Is the advice useful?
See also
Присоединяйтесь к нам
New advices