In Greek mythology, the patron God of the arts Apollo was surrounded by a retinue, consisting of nine beautiful muses. Each of them had the ability to one art or science. And, moreover, could give them what we thought to be worthy of this beautiful gift. 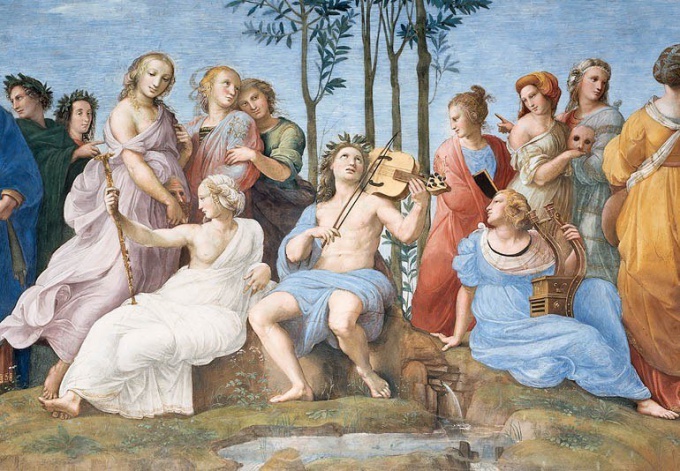 Related articles:
Extant descriptions of the music are controversial, but most authors agree on one thing: all the muses were daughters of Zeus and goddess of memory Mnemosyne. They lived on mount Parnassus, at the foot of which beat Kastalsky key – the source of divine inspiration. On the ground in honor of each of them were established temples, known as masanami. It is from their names was the word "Museum".

Functions and attributes of the muses

The eldest of the muses were calliope – Muse of epic poetry. Her son is considered a legendary singer and musician Orpheus. In a sign of supremacy over the other muses, calliope was wearing a Golden crown. Usually she was depicted with a writing tablet coated with wax, and a stylus (bronze rod for the application of the text).

Clio – the Muse of history, whose attributes were a scroll of parchment or a tablet.

The patrons of theatrical art was the Muse of tragedy Melpomene, the Muse of Comedy Thalia. Both portrayed with a wreath of ivy on his head and a mask of Melpomene, it was tragic, Waist – comic. By the way, Melpomene was the mother of a dangerous and seductive sirens, who inherited her divinely beautiful voice.

Polyhymnia – Muse of solemn hymns. The ancient Greeks believed its Creator so beloved of the Lira. As a rule, Polyhymnia depicted with a scroll in his hands.

Terpsichore was considered the Muse of dance. She was depicted with a constant smile on his lips, sometimes dancing, but mostly sitting and playing the lyre.

Urania – Muse of astronomy, holding a celestial globe and a compass. According to some versions, Urania is considered to be the mother of hymen.

And finally, the two poetic muses: Euterpe – Muse of lyric poetry and music – and Erato – Muse of love poetry. A mandatory attribute of Euterpe was a flute or a lyre, Erato – harp.

Mention of the muses in literature

For the first time in the literature on music was mentioned by Homer and Hesiod. Nine muses appeared not at once. Homer said something about one, then about a few muses, but none of them mentioned by name. Later, various sources said about the three muses, which is often confused with haritaki were considered to be goddesses of fertility, and then beauty and joy. Gradually the number of the muses grew to nine, became famous and their names.

A classic text on music was the "Theogony" of Hesiod. They were described as beautiful lady, wonderful voices glorifying the heroic deeds of Zeus. The Hesiod thanked the muses for the gift of chants", which they gave.

The influence of music on human life

The ideas of ancient Greeks, the muses accompanied the man in all the most important moments of his life: birth and death, love and marriage, the art class, the choice of life.

Starting with the archaic period, the image of the nine muses can be seen on sarcophagi. The ancient Greeks believed that the muses accompany the souls of the dead to the heavenly island of happiness.

Introducing the all famous Greek science and art, muses symbolized the creative power of the person who was supposed to Wake up for his life and to give the world beauty and harmony.
Is the advice useful?
Подписывайтесь на наш канал