Muse – in Greek mythology, the patron of arts and Sciences, mentor talented people. The nine muses were considered as daughters of the Supreme God Zeus and the goddess of memory, Mnemosyne. Each Muse was responsible for a kind of science or art, but they were all necessary to achieve harmony. 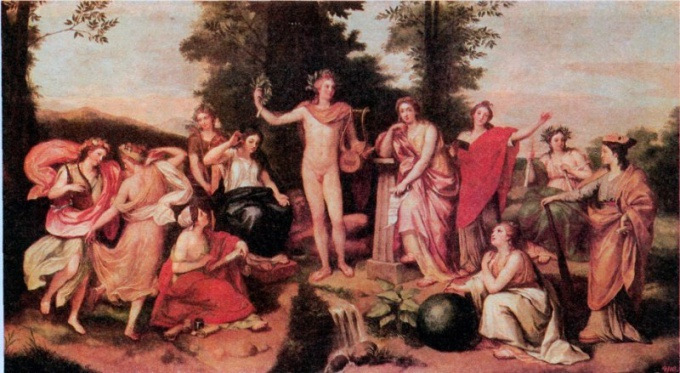 The sisters were equal, but the Queen of the muses, the Greeks believed Calliope, the Muse of sacrifice and patriotism. Calliope symbolized the love of country and inspired the soldiers before the battle. Also it was called the Muse of epic poetry and was depicted with a scroll and stylus in his hands.

With the friendly Calliope was the Muse of history, Clio. She was depicted with the tablets, which recorded even the most minor event that took place in the world. No one should forget your past because without a past there is no future – that is the motto of Clio.

Another patron of science, Urania was considered the wisest of the daughters of Zeus. The Muse holds the celestial sphere and compass, which determines the distance between the stars. Urania symbolizes not only astronomy, but also the desire for knowledge, hunger to the stars.

Modern patron of the theatre, the Muse of tragedy Melpomene, the Muse of Comedy Thalia personified in Ancient Greece, the theater of life in which people play their roles according to the will of the gods. Melpomene is traditionally portrayed with a tragic mask in the hand, but in the other hand can hold the sword, punishing the perpetrators of the final play. Waist with a comic mask in her hands, defended the possibility of a happy ending to any story. It was characterised by optimism and contagious joy.

The Muse of poetry Euterpe was considered the most beautiful of the muses – the gods on the Olympic feast could listen for hours to her poems. She was depicted with a pipe and wreath of flowers, often surrounded by forest nymphs, as poetry and music prompted her nature.

Erato was responsible for love poetry. She urged all couples to fight for their feelings and to cherish them. When a person speaks words of love, or hugging a loved one, the Muse Erato playing a gentle tune on his lyre.

Terpsichore is the patron of dance, and the dance in Ancient Greece expressed special connection with nature, the unity of body and soul in motion. In hand the Muse holds a harp, the sounds which are heard only talented dancers.

Only Muse without distinguishing symbols were Polyhymnia. She favored the speakers. At her will the speaker's speech can light a fire in the hearts of the listeners or apprehension. Polyhymnia was also a Muse of prayers and hymns addressed to the gods.

The muses were companions of the God Apollo lived on mount Parnassus, at the foot of which beat Kastalsky key. A SIP of water from this source was inspired, because the Muse has protected all who sought to perfect.

Nine goddesses, the sisters revered throughout Greece and they built temples called sazanami. From muzayanov the name of modern museums – repositories of works of art, the creation of which was inspired by Muse.
Is the advice useful?
See also
Присоединяйтесь к нам
New advices