How to get to Afimall city in Moscow

Mistakenly believed that the only large and conveniently located shopping centre within the ring road in Moscow alone – and it's "European". Although just one metro stop away is another center of a giant- "Afimall city", within which is also quick and easy. 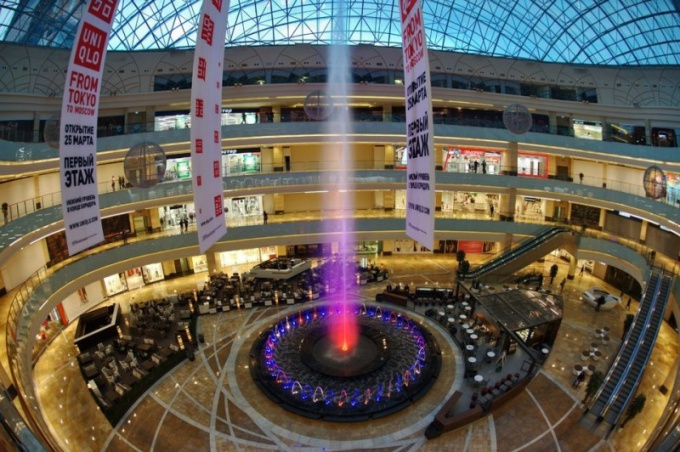 As the global crisis has broken plans "APIMELL"

The decision to build one of the most beautiful shopping centers in Moscow was taken in the spring of 2008, but in connection with the financial crisis the opening of the "APIMELL" had to be postponed until better times, namely, till may, 2011

However, the long-awaited opening was solemn and was attended by many Russian pop stars: Dima Bilan, group "Factory" and "band'eros".

Unlike most of its competitors, the property is not within the boundaries of the Moscow ring road, but much closer – in the center of one of the largest investment projects of the last decade, the Moscow international business center "Moscow city".

Afimall is famous for its large-scale exhibitions: about 2 years on the 6th floor of the Mall was the display of giant matryoshka dolls. Now it was replaced by the exhibition "Titanic."

3 ways to get to the "APIMELL"

To get to the shopping centre by public transport, you need to take metro station Kievskaya (Filyovskaya line).

Because it is the only branch that has a fork, you need to be extremely careful: with the same platform, the train leaving in the direction of two stations "Kuntsevskaya" and "international".

In order not to disorient passengers, all trains that go to "Kuntsevskaya", do not declare, but if any part should be up to "International", it will say on the loudspeaker and write on the digital Board, which is located above the track.

Trains to the "International" run with large intervals – on average, the wait can lay up to 10 minutes. After the "right" train has been selected, it should pass only one run to the station "Vystavochnaya". But what! Unlike most of the spans between the stations, the path from "Kiev" to "Exhibition" will take about 7 minutes.

But to rise from the convenient metro station is designed in such a way that when you exit once you get into the shopping center.

To get to the "Afemale" and on a personal car – it is necessary to reach the junction where the SEC (Third ring road) crosses the Krasnopresnenskaya embankment.

Private Parking at the entertainment centre there, but underground, and, to the surprise of many, paid. Car Park within 2 hours and will cost 100 rubles/ hour, 3-4 hours – 50 rubles/hour.

There is a third way to get to "APIMELL": on the train, which departs from the Belorussky railway station. Fit the train, next to Odintsovo, Golitsyno, Mozhaisk and Borodino, which make the stop at the station Testovskaya.

Although the Mall is very close from the railway tracks to get to it is not always easy - due to the ongoing construction on the territory of "Moscow-city".

By the way, Afimall is not only one of the most beautiful and meaningful projects, but unfortunately investors, and even one of the most sparsely populated and unprofitable.

The development company that funded the construction of the center, Afimall daily visited by 20 thousand people, while the daily throughput of the nearest (in the sense of scope and geography) of a competitor, the SEC "European", is 130 thousand people.

Despite this, news of the possible closure of the shopping center has not yet been reported.
Is the advice useful?
See also
Подписывайтесь на наш канал