Why curl the leaves of tomato

Even the most experienced gardeners who know all about the correct cultivation of vegetables, from time to time face challenges. For example, sometimes they have to see that curl the leaves of tomato. Experienced grower first starts to identify the causes and then to its elimination. Treatment of tomato Bush depends on the reasons, but they may be several. 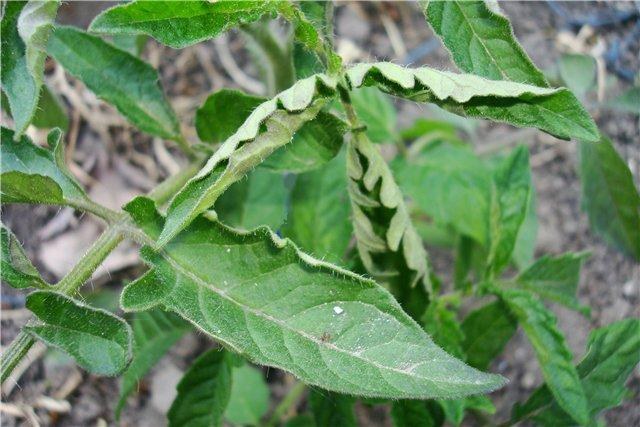 With the best of intentions, i.e. to increase future harvest, gardeners-fans bring in soil under tomatoes to nitrogen fertilizer. After all, they are mostly determined by high yield. Meanwhile, when excess nitrogen in the soil occurs opposite result – fruit formation does not occur. And begins the process of leaf roll in the tube, which soon dry up and fall off.

As a rule, along with twisted leaves an excess of nitrogen is also seen in the thickening of the stem Bush and the abundant emergence and development of laterals.

To reduce the concentration of nitrogen in the soil you once, but abundantly watered bushes of tomatoes and plenty of water. This way you will wash the top layer of soil. But it is necessary to comply with one condition – the water should leave the site, not zastaivayas near the plants (just dig the groove runoff). Otherwise, your tomatoes will suffer from overabundance moisture.

The leaves of tomatoes start to curl from excess moisture and lack of it. To remedy the situation, you should in the first case, temporarily stop watering the plants, periodically loosening the soil under the stem and mulching them to prevent crust formation, which will not allow air to the roots. In the second case (lack of moisture), increase the frequency of irrigation or volume of water under every Bush. It is also advisable to mulch the soil surface under the bushes, pine needles, sawdust or large cones.

If you notice that the leaves of the tomato bushes had twisted, but you are not zealous with the nitrogen fertilizer and watered correctly the plants, tear a few leaves curled, expand them and try to consider if there are pests inside. If any, please seek the advice of a specialist in the store. He will advise you which drug to treat the bushes to get rid of pests. Usually recommended insecticides "but the taste", "Alatar", etc.

If you have nothing and no one will discover inside the twisted tomato leaves, most likely, you have encountered a viral disease of plants, which, alas, cannot be cured. The output in this case, one: removal of sick bushes.

After manipulating with diseased plants, wash your hands thoroughly before moving on to a healthy one. And in any case, do not work with healthy bushes of tomatoes in the same gloves that you touched the sick bushes.

Attention! If you have a large plantation of tomatoes, you can see the first signs of viral infection in plants (this is just rolled up leaves). The following manifestations of the disease – excessive blossom drop, small ugly fruit (like wood). Get rid of these plants without regret and never take their seeds, even if a viral infection was formed after the appearance of the fruit, seemingly quite healthy.

Circumcision leaves and remove side shoots

Topping separate branches from the tomato Bush, and deleting excessively large number of laterals, especially the overgrown, can cause leaf rolling in tomatoes. Normal during the week, you can cut the plant no more than 2 leaves. With more intensive cropping and side-shoot removing disturbed the natural balance between the roots and aerial parts, resulting in curl, and leaves.
Is the advice useful?
See also
Подписывайтесь на наш канал