Where better to relax in Greece

Greece can be considered as one large resort: every corner of this warm Mediterranean country rich in sunshine, olive groves and vineyards, perfect for relaxing. But there are some especially beautiful areas with a developed tourist infrastructure, where is the best place to relax. 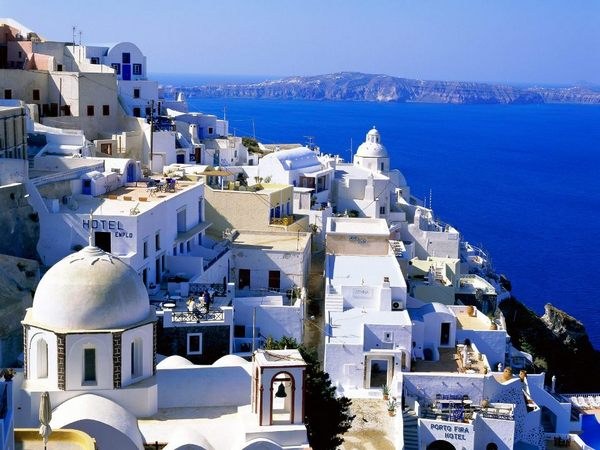 The best places in Greece for a beach holiday

Rugged long coastline and many large and small Islands in the Mediterranean sea turned Greece into a country of a beach holiday: rocky, sandy, and mixed beaches, framed by the resort towns or the palm groves are found almost at every step.

The perfect place for a serene and relaxing holiday by the sea is an incredibly beautiful island of Santorini, located at the head of the list of the most beautiful Islands in the world, which includes Bali, the Great barrier reef Islands and Boracay island in the Philippines.

Santorini is actually a group of Islands surrounding the ancient flooded Caldera that was formed over several centuries BC after the eruption of the volcano. Especially beautiful resorts of the main island of Thira on the banks of the Caldera: there is quite a steep coastline, with the height of the cliff are the picturesque Islands on the other side of the lagoon. The village Islands are an unforgettable sight: traditional Greek houses painted in bright white color, particularly dazzling in the hot Mediterranean sun. Rest here is not cheap, but the beauty of the island is worth it.

The major resorts of Santorini is the towns of Fira, Oia, Kamari and Imerovigli.

Corfu is also popular with tourists who prefer beach holidays. This area of Greece has earned fame due to the abundance of greenery that is usually uncharacteristic of the Greek Islands and resorts. There are whole forests of olive groves and other trees, and picturesque beaches and good hotels of all classes, from the cheapest to five-star, make this place even more attractive.

Almiros Corfu is one of the most beautiful beaches of Greece, unspoiled and with crystal clear water.

The best places in Greece for a cultural holiday

Greece is one of the few countries where a beach holiday can easily be combined with sightseeing, which is very rich in this ancient country. Even on small Islands and small resorts can be found the remnants of the ancient civilizations that flourished in this area, but there are a few places with the richest historical heritage.

Crete is one of the most interesting Islands of Greece. The cradle of ancient Greek, or rather, Minoan culture, which initiated the development of the first advanced European civilization left behind many monuments. The beauty and purity of sandy-pebble beaches of Crete attracted far less attention than an ancient ruined city, the ancient Palace of Knossos, the cave of the chief Olympic God, the old monasteries.

The most complete picture of the heyday of ancient Greek civilization you can get, relaxing in Athens. This city combines ancient architecture and modern reality. Its main attractions are the Acropolis with many ancient temples, including the famous Parthenon and the museums of the ancient world. Located near Athens Riviera, a number of resorts along the Mediterranean coast where you can relax after a busy sightseeing in the hot city.
Is the advice useful?
Подписывайтесь на наш канал