What's the story behind the novel "don Quixote"

The name of the famous errant knight don Quixote on everyone's lips, even those who have not read the famous novel by Cervantes. A passionate admirer of chivalric novels, fifty eccentric Alonso Quijano invented for themselves a new name and decided to become famous by knightly deeds. What is the history of the creation of a novel about the adventures of don Quixote? 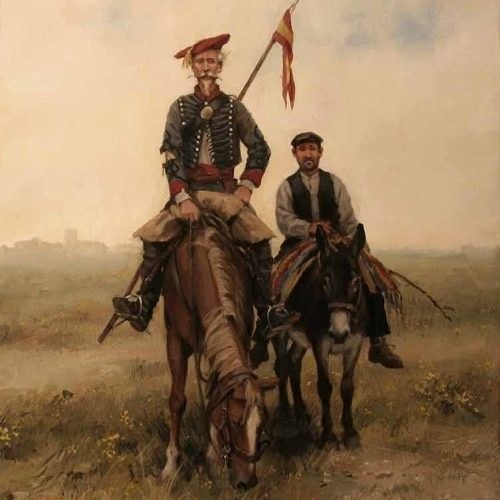 Cervantes and his epoch

To understand the history of "don Quixote", need to clarify some facts from the author's life and novel features of the age in which he lived and worked. The life of Cervantes fell on the crisis period in European history. Feudal Europe over the centuries turned into a region where there was a social and industrial revolution, the successful development of experimental science.

Spain, the birthplace of Miguel de Cervantes, in the XVI century has turned into a second-rate country, which, though owned vast colonies, but did not play a dominant role on the political stage of Europe. These features of the situation of Spain and is reflected in the story of the comic the adventures of don Quixote, accompanied by the squire Sancho Panza.

Cervantes was born near Madrid. He was not able to study at major universities; all of his extensive knowledge is a result of profound erudition. In addition, the author of "don Quixote" loved to listen to and to watch theatrical performances that often gave the itinerant actors.

On the stage of the street theatre played out a fascinating view of the life of knights, daily life in medieval Europe. Some of the stories and was the starting point for the creation of Cervantes tales of chivalry.

From the history of "don Quixote"

In 1587 Cervantes received a modest office and was in charge of purchasing provisions for the future of the Spanish expedition to the coast of Britain. However, the skills of commercial activity, he did not and even was for some time imprisoned, being accused of embezzlement.

While in prison Cervantes and the image of the future hero who went mad under the influence of chivalry and went in search of adventure, before the world in the form of the Knight of the Sorrowful countenance.

His work Cervantes was initially conceived to make a novel. The researchers suggest that the story of the exploits of don Quixote in its original version included a few chapters of a future novel and was printed as a separate publication.

The novel by Cervantes was not created overnight. In fact, the work represents two novel that were published with the gap of ten years. The first part was published in 1605, the year, the second in 1615. Only twenty years after the publication of the second part of the publishers has combined the work into one novel, which received the abbreviated name "don Quixote".
Is the advice useful?
Подписывайтесь на наш канал