What interesting places in Karelia

The whole Republic of Karelia is one big interesting place. In Karelia 4 thousand cultural, historical and natural sites that tourists can visit. Not enough years to read all. 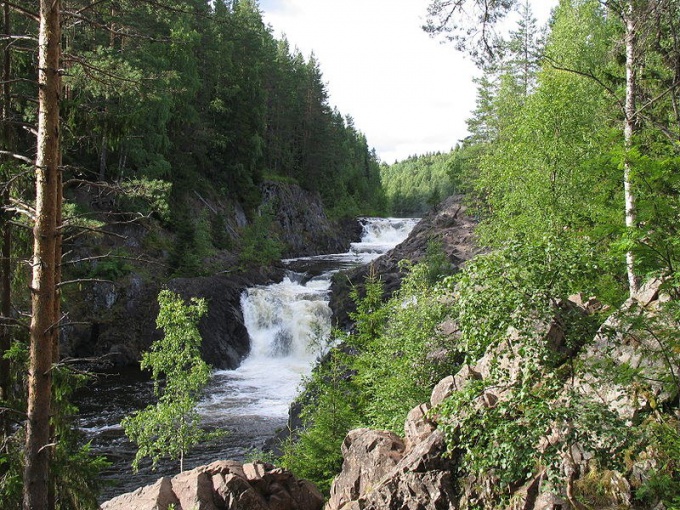 Related articles:
Karelia - Russian area of unspoilt pristine and beautiful nature. About these places is the fame all over the world, everyone who comes here falls into the tale. Uninteresting places here just do not find, however, as ugly.

In Karelia is the oldest largest Museum-reserve of wooden creativity. Kizhi is a small island group, which is one of the first museums under the open sky. This reserve is included in the world heritage list of UNESCO. The Museum covers an area of 10 thousand hectares. The first exhibits - the Transfiguration Church with 22 domes of the intercession Church and the bell tower.

Now in this place brought a lot of buildings, including the oldest Russian wooden Church - "Resurrection of Lazarus". The staff of the ethnographic Museum raised folk craft of the 17th and 18th centuries, it collected about 30 thousand exhibits.

In Karelia there are petroglyphs - ancient images on the rocks. These are pictures of people knocked the quartz bump stops to a depth of about 3 mm. the pictures almost in a horizontal position on the cliffs, they were created in 4-3 millennia BC. At the moment, the scientists were able to unravel the meaning only half of these images, but this is very curious.

Still people continue to find new drawings. Say if at sunset to see the petroglyphs at a certain angle, it looks like they depict animals move.

The animal world of Karelia is also varied. Here you can find 270 species of birds, wolves, bears, lynx, elks, deer and wild boars.

Karelia - the country of lakes, rivers, rivulets and streams. Many fascinating paintings opens before the traveler is on the banks of rivers and lakes. Famous for numerous waterfalls of Karelia. For example, the Kivach waterfall on the river Sune. The height of the waterfall is about 10.5 meters, the river is compressed among the rocks, a torrent, breaks free and falls down, breaking into foam.

When the Emperor Alexander II visited waterfall Kivach, the reserve put a good road to the falls, which staff reserves support so far.

Another astonishing views, the Marble canyon in the Park "Ruskeala". Earlier in this quarry were mined marbles, now in splashes of emerald water, over which hangs the cliffs up to 25 meters. Incredible views, exotic lichens and mosses, pristine nature and man-made bowl attracts thousands of tourists.
Is the advice useful?
See also
Присоединяйтесь к нам
New advices