How to weave a bracelet with the name

Bracelet with the name - original and exclusive decoration, and made with your own hands, it is doubly expensive. There are several ways of weaving beaded bracelets with the name, the most simple - cross method and textile. 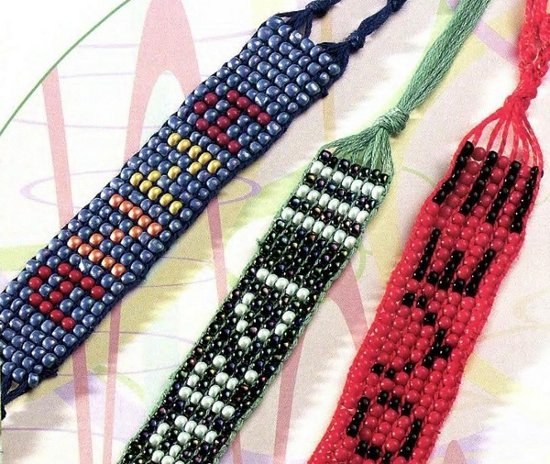 Related articles:
You will need
Instruction
1
Make a diagram of the weave of the future bracelet. On the sheet in a cage, draw a rectangle with the number of cells which must be equal to the number of beads in the bracelet. Fill in the cells for a schematic image of the letters with a Sharpie of a contrasting color.
2
Calibrate beads. Pick up a bead the same size with a rather large hole, so that through him could pass freely waxed thread or fishing line. Put on shades in different capacities.
3
One of the simplest ways of weaving bracelet with cross. Fold the waxed thread (fishing line) in half and string on her 4 beads. In the most extreme bead thread the second end of the thread and tighten it into the ring. Then string on the left end of the 2 beads and the right one the bead of the base color.
4
Thread the right end of the thread through the second bead from the left side and tighten. Braid thus to the required length. Next, braid the scheme, stringing in the right place the beads in a contrasting color for forming the letters of the name according to your scheme.
5
To make a wider bracelet, string on one thread 3 beads, miss the second end through the third bead. The result is that both ends of the thread out of the side beads of the first row.
6
Then string on the right side of the thread 2 beads, and the left - 1, thread the right end of the thread to the left, that is, in the result, the parties swapped. Then pull the thread through the side beads of the first row and tighten.
7
String on the right and on the left side of the thread on one bead. Pull the right end through the left bead and the lateral bead of the first row, tighten the thread. Continue to braid until the desired length is similar to this scheme, changing the beads where necessary.
8
To make the bracelet with the name by way of textile, you need to first make a special machine. Decoration made with it, you get neat and smooth, in addition, your work will be accelerated several times.
9
You can use the cardboard box, the edges of which attach dressmaker pins. To them tie the warp threads, which should be one more than the number of beads in the ornament. Pull the warp threads are not too tight but not too loose (threads should not SAG).
10
Cut the waxed thread (or fishing line). String on it the required number of beads according to your scheme through the ranks. Secure the end of the thread with beads on the extreme warp on the loom on the left side.
11
Spin a number, holding thread with beads horizontally across a single warp yarn, the first needle is located above, then under the base and so on. A number of unfold and do the following in the opposite direction, that is, the string to thread the beads and thread through the warp threads, as described above.
12
Braid this way until the required length of the bracelet attach the last bead. The warp threads, remove the pins from both sides of the machine. All the strings fold together and tie a single knot. To make drawstring, split the thread into 3 equal parts braid a regular braid on each side of the bracelet. Make another knot at the ends of the drawstring.
Is the advice useful?
See also
Присоединяйтесь к нам
New advices