Thermal springs and mineral waters of Kuban has long been famous for its healing properties, but only recently began to regain its former glory and popularity. Unique natural attractions and resorts comparable to that of Europe, located very near us - Russian Federation, Krasnodar Krai. 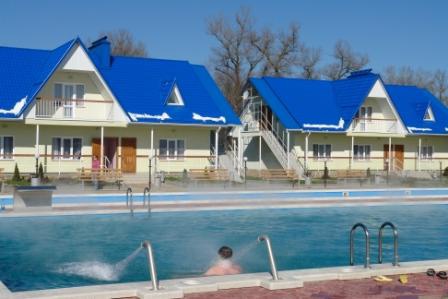 Related articles:
Krasnodar Krai and, in particular, Mostovskoy district has long been known for its healing thermal springs and mineral waters. We all remember that the resort of Mineral water had the status of a Federal resort in Soviet times. Now it's a pretty expensive world-famous venue, along with seaside resorts. Currently also gaining popularity other sources and springs, the majority of which is in the Mostovsky district of Krasnodar region. People seeking to feel the beneficial effects of these medicinal underground waters, getting here all the same, but away from the crowds and high prices, practically in the lap of wild nature, but without departing from civilization, as most sources are located near the village of Mostovskoy. Hot thermal pools are open all year round, even in winter - an unprecedented pleasure to take a hot bath under the open sky during a snowfall, admiring the mountain peaks and breathing in crystal clear air of pine forests. On the basis of the sources are public pensions and holiday homes for every taste and budget. In the private sector you will be able to find the guest house and offers rental housing to rest.

Range of usefulness and therapeutic effects of mineral waters and thermal springs and varied. Their medicinal properties this water has its mineral composition, which it is gaining, filtering underground through layers of earth rocks, saturated with minerals and gases. Substances such as potassium, sodium, iodine, bromine and others, have not only a relaxing effect on the body as a whole, but also beneficial to the function of internal organs and systems, so taking such water as a drinking and bathing, are useful as prophylactic and therapeutic. Proof of this are the historical facts about what people for centuries have used this gift of nature, to the places of thermal waters and springs arranged pilgrimage, and for its healing properties, many sources have dubbed the sacred and became the recognized Holy places of the Church. One striking example, until recently little known, are the sources of mineral water "Sour". Information about their existence is mentioned in manuscripts dated to times BC, discovered during excavations of ancient highland settlements. Centuries the way of the caravans invariably passed through these sources from ancient Persia to the Black sea, and then speak of their healing properties. More than ten springs are located at the giant salt ledge, formed by deposits of salts and minerals from these waters for thousands of years.

In 60-ies Soviet scientists have examined these sources and found that each spring a unique chemical composition, on the basis of which was determined by the useful properties of each spring. Another unique feature of these sources is that from under the ground hits the water is already saturated with carbon dioxide, which is rare for most thermal waters. Many people wonder about this and compare the water with such well-known drinks like the "Seltzer" or "Essentuki". They are located at the border of the Krasnodar territory and Karachay-Cherkessia at an altitude of over 1800 meters above sea level in the valley also opened the recreation center, but due to the rugged mountainous terrain and border areas access to sources is limited. But many consider it a plus since this location allows you to preserve the pristine purity and beauty of this wonder of nature.
Is the advice useful?
See also
Присоединяйтесь к нам
New advices