How to straighten a dent on the car

The dent that appeared on the back of the car, can ruin not only the appearance of the vehicle, but also the mood of its owner. Often remove dents in auto repair shop. But if the body deformation is not very significant, you can try to get rid of it on their own. 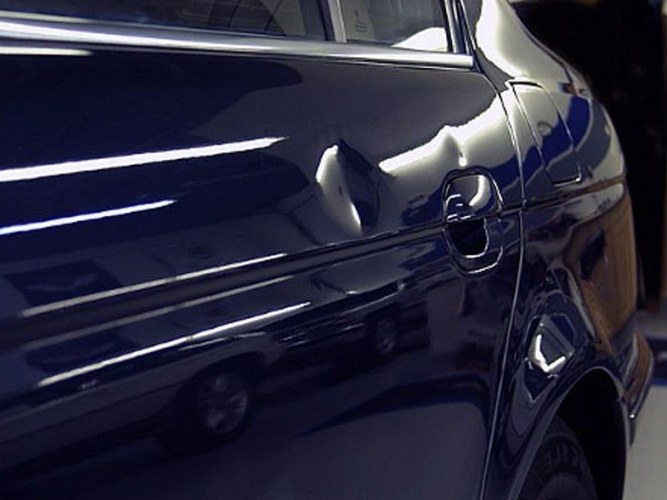 Related articles:
You will need
Instruction
1
Inspect the damaged surface of the car body and determine the type of dents. Deformed plots can be divided into two categories. Dents of the first type appear weak mechanical impact, for example from a kick or a hand on the car door. Them to resolve on their own relatively simply. The second type of damage – when a dent appears from a collision with another vehicle or solid object. Fully straighten out such a dent to almost impossible.
2
Prepare the space for work. Clean the damaged area from pollution. If the dent is located, for example, on the door until it stops, lift the glass, remove the inner trim and remove the other design elements that may interfere in work.
3
Please rate the degree of damage, examining the car door from the inside. Rubber mallet from the inside, apply a few light blows on the deformed site. In some cases, the mallet does not help. Then wrap a clean rag suitable size wooden block, attach it to the dent and start making a light tapping from a hammer. Gradually, the damaged area will straighten up.
4
If a dent appeared on the side of the car, open the Luggage compartment and remove the covering. This will provide more space for work. After inspecting the dent on the wing, follow the same steps described above for doors. Make the outside of the body surface became more smooth.
5
Eliminating the defect, smooth external surface of the body in damaged areas, Prime and paint with matching colour paint. This will allow to almost completely remove even the smallest signs of damage. But if the dent was very significant in size, it is possible that straightening it completely without a trace you will not succeed. In this case it is better to go on additional expenses and to entrust the processing of damaged bodywork professionals.
Is the advice useful?
See also
Присоединяйтесь к нам
New advices