How to build a house of cards

If you believe the encyclopedia, the map is just a sheet of paper for the game. However, as the history of the world, these sheets of paper brought a lot of troubles and use, and sometimes even changed people's lives. Cards are not only gambling, but also "patient simulator" - try to build a house of cards. 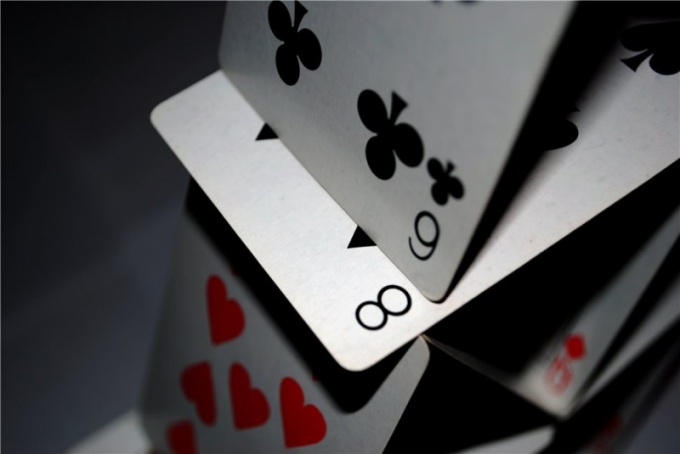 Related articles:
Instruction
1
Thus, the map is a rectangle of thin cardboard that has two large sides and two small. To build a house of cards, you need at least one deck of 36 cards. For starters it is better to take tattered map with a crumpled edges. They better retain stability. You can also to cheat a little and slightly moistened by saliva to the edge of the cards to lightly glued. Houses need to build on a smooth, level and stable surface.
2
Build classic house. Draw two cards, put them on the small ribs at a distance of about 5 cm from each other, tilt the vertex to touch, to get the letter L. Thus, build some more support vertices around. Next, place them on the edge of the card flat so that one end of the card lying on the vertex, and the other end to the next. On the resulting site build support tops, etc.
3
House made of triangles. Install three cards on large edges next to each other to make an equilateral triangle. This design will lay flat one or two cards. On the resulting site again construct a triangle. Such triangles can extend the house in different directions, attaching card. The house is robust and resembles a triangular honeycombs.
4
A standard house. This method is used by most card "architects". Take the four cards and set them on the small ribs a square so that each side of the square began from the mid-rib of the card. If you look from above, you get like four Tons, connected to each other. It is the position of the cards is considered the most stable and allows you to collect enough high design.
Note
Passionate fans of cards at the time were A. S. Pushkin and F. M. Dostoevsky. Playing poker today is sports game, are even world Championships.

To build a house of cards is not so easy. We must have patience, accuracy and concentration to carefully build a house. What can we say about Brian Berg, who builds skyscrapers using several hundred thousand cards at a time.
Is the advice useful?
See also
Присоединяйтесь к нам
New advices