How to replace the touch glass

On our phone the market sold a lot of touch screen devices manufactured in China. Often it can be damaged from careless handling. Replacing it is not particularly difficult. It's enough to have minimal skills with a soldering iron. In addition, the cost of spare parts is only around $4-6. 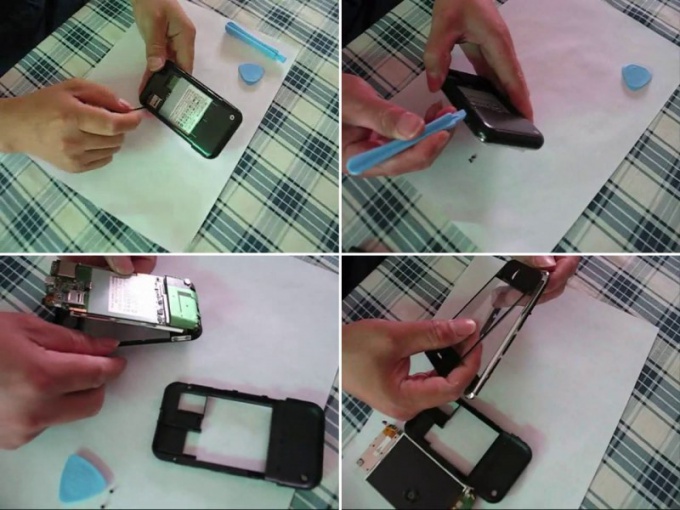 Related articles:
You will need
Instruction
1
Remove the stylus. Remove the back cover by sliding it back slightly. Remove the battery, memory card and SIM card. Take the small curly head screwdriver and remove the two screws on the bottom of the bottom. Rent a puller from the kit to replace the touchscreen glass, it is usually the largest and has a "G-shaped" tip. Slowly and carefully detach the bottom part from the top around the perimeter. For this you need to take case with touch glass slightly to the side and bring the clips out.

2
Put your phone touch glass down. Take a soldering iron with a fine tip and a power up to 40 watts. At the bottom of aspaite loop replacements, four contact. Take the puller out of a set, a triangle with rounded ends. Neatly around the perimeter disconnect the upper part of the touch glass. Note the areas with the top speaker and side volume switch. Take the touch glass, which is pasted on the upper cover and the puller is triangle around the perimeter to release it.

3
Take the new touch glass with Flex cable. Remove the top cover remains of the previous adhesive and dust. Glue neatly to her glass, moving the plume from the other side. Smooth out all the bumps. Wipe with a cloth for screens its inner side, so as not to leave fingerprints. Insert the main button. Take the upper part of the screen and also wipe it. Put the top cover with the glass on the table glass down. The upper part of the paste into it, using the puller is triangle. Note speaker, side switch and the ribbon cable that print on it.
4
Take the soldering iron and saladita the ends of the train. Long puller from the kit hold it and solder to the Board on the upper cover. Take a needle and divide accurately track the plume. Premakniti the bottom part to the top and screw the bottom two screws. Put the battery. Put back cover and stylus. Turn on the phone and calibrate the touch screen.