How to cook real Russian soup

Soup is one of the most famous dishes of Russian cuisine. In the beginning it was a simple soup in which the cabbage was considered to be absolutely not a required component. Later, the soup began to be called only cabbage soup. The main feature of the soup is their sour taste for using fresh or sour cabbage, nettles, sorrel and spinach. Prepared soup in meat broth and served with a piece of meat. 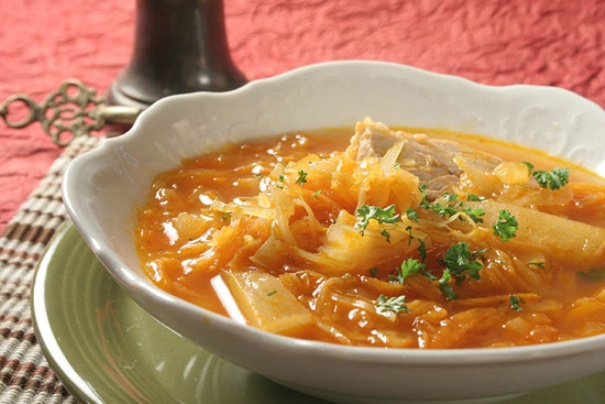 Related articles:
You will need
Instruction
1
To begin with, cook a broth for soup. To do this, take beef bones, wash them under running water, Pat dry and chop into smaller pieces. Then put the bones into a deep saucepan, cover with cold water and place on high heat.
2
Bring bones to a boil. After they boil, immediately reduce heat, a little salt and cook the broth at a low boil for two to three hours, until the meat separated from the bones. Don't forget to periodically remove from broth fat and foam.
3
While cooking the broth - clean vegetables. Wash the tomatoes. Then scald them with boiling water and remove the skin.
4
Peeled potatoes cut into cubes or cubes. Cabbage, carrots and onions – chopped, shredded, tomatoes – small slices.
5
Then fry onion in hot fat in a frying pan for five minutes until slightly Golden. Then add carrots, chopped parsley and saute everything for another ten minutes. Next, add the tomato paste, mix well the vegetables and continue to simmer for three minutes.
6
From the finished soup take out the bones and put it on the fire. In boiling broth put the finely shredded cabbage, bring to the boil and immediately add the potatoes. Boil them fifteen minutes, then put the browned vegetables with the tomato paste and cook for another ten minutes.
7
Five minutes before readiness put in the soup chopped tomatoes. At the end of cooking add in the soup two or three Bay leaves and a few peas black pepper.
8
Ready soup remove from heat, cover with a warm towel and let steep for ten to fifteen minutes. Then pour on plates, sprinkle with chopped greens and put sour cream or mayonnaise. These serve the soup with a piece of meat. Bon appetit!
Useful advice
Instead of fresh tomatoes you can use pickled, then the soup will be even tastier.
Is the advice useful?
Присоединяйтесь к нам
New advices