How to cook mussels in the shell

If shrimp and crab is quite a familiar product on our table, the mussels, edible shellfish in bivalve shells, are less popular among consumers. Perhaps because many people simply are not familiar with the ways of preparing mussels at home. 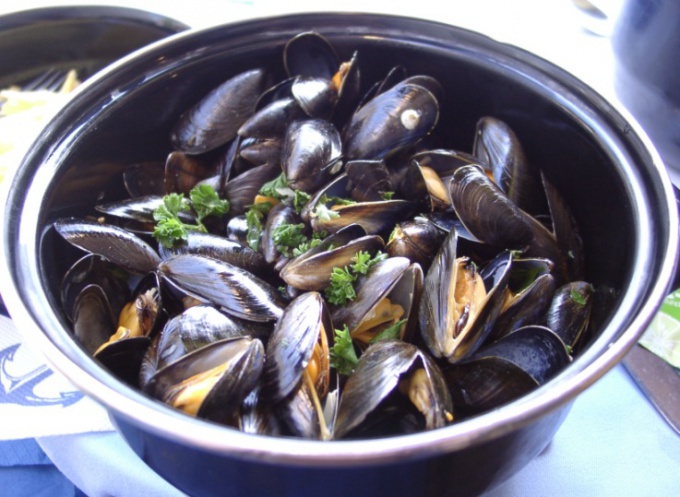 Related articles:
You will need
Instruction
1
Mussels used for the preparation of salads, appetizers, first and second courses. Try to cook mussels with vegetables.
2
To start cooking you need to peel the shell under cold running water with a brush and slightly scrape them with a knife. In addition, it is necessary to remove the small, hair-like, a bundle of fibers through which the clam is attached to the rocky surface of the seabed. To cut the "beard" it's pretty much pulling it. Meat mussels would not be affected.
After that, live clams, put in cold water for several hours, periodically changing its order to remove foreign bodies and sand.
3
Peel and chop the onions and garlic, peel the carrots and celery cut into strips. Wash and chop the bunch of parsley.
Heat in a large saucepan the butter and slightly saute vegetables, parsley, a clove of garlic, add the Bay leaf and peppercorns.
Pour in the pan the water and wine, add salt and bring to a boil.
4
Lower it into the boiling mixture prepared mussels and simmer, covered for 7-10 minutes on high heat until all the shells open. From time to time you will have to shake the pan. Then drain the mussels in a colander,remove not opened, open the rest of the shell a little wider, sprinkle with parsley and serve.
Bon appetit!
Note
The sash shell quality raw mussels should be tightly closed or close if you tap them, such as a pen knife. If not, these molluscs as food should not be consumed.

In the process of cooking the shells must be opened by themselves. If they remain closed, then the meat is inedible.
Useful advice
Consisting of 83.2% of water tender mussels are very nutritious. It contains 15% protein, 1.5 % fat, a significant amount of these valuable minerals, such as calcium, iron, phosphorus, and many trace elements. It is rich and vitamins.
Is the advice useful?
Присоединяйтесь к нам
New advices